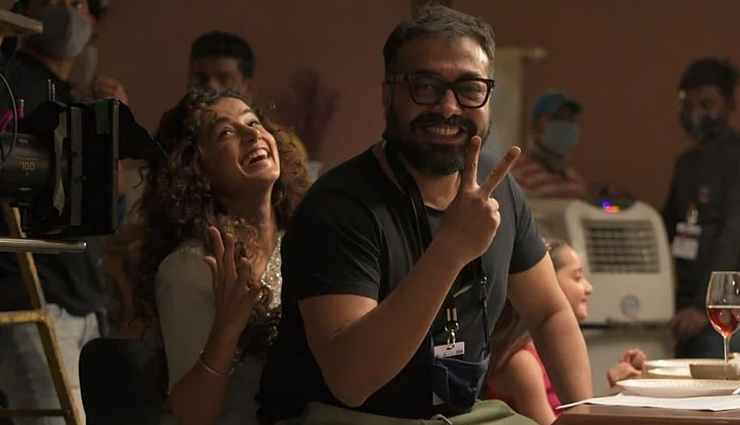 "With all our love to all the haters", filmmaker Anurag Kashyap said on Saturday in a message on Instagram to announce that shooting of his film "Dobaaraa" with Taapsee Pannu had resumed.

This was Kashyap's first comment since March 3 when the Income Tax Department searched his properties as well as those of Pannu and his partners who launched the now shuttered production house Phantom Films.

The director took to the social media platform to share an on-set picture with Pannu and said they have restarted filming on their second project together. Both Pannu and Kashyap are known for their outspoken views on a range of issues.

"And we restart #DoBaaraa .. with all our love to all the haters," he captioned the photograph, refraining from directly mentioning the I-T raids.

The project will mark the filmmaker-actor duo's third collaboration after 2018's hit "Manmarziyaan" and biographical drama "Saand Ki Aankh", which had Kashyap on board as producer.

"Our vision with 'Dobaaraa' is to bring a fresh, new story to the audience and I am very excited for it. This will be my third collaboration with Taapsee and this time the attempt is to bring an interesting new take on thrillers," Kashyap had said in a statement.

Earlier in the day, Pannu posted a three-point statement on Twitter on an "alleged bungalow" in Paris, the "alleged receipt" of Rs 5 crore and her "memory of 2013 raid".

The searches targeting Pannu and Kashyap are part of a tax evasion probe against Phantom Films.

Pannu also took a dig at Finance Minister Nirmala Sitharaman's statement that the actor was raided in 2013 as well.

Besides the actor-director duo, the IT department conducted searches at Reliance Entertainment group CEO Shibhasish Sarkar and some executives of celebrity and talent management companies KWAN and Exceed, premises.

The others searched included some employees of Phantom Films, which was dissolved in 2018, and its then promoters Kashyap, director-producer Vikramaditya Motwane, producer Vikas Bahl and producer-distributor Madhu Mantena.

The Income Tax Department has detected financial irregularities of over Rs 650 crore after it raided two film production companies, two talent management companies and a leading actress, the Central Board of Direct Taxes has claimed.