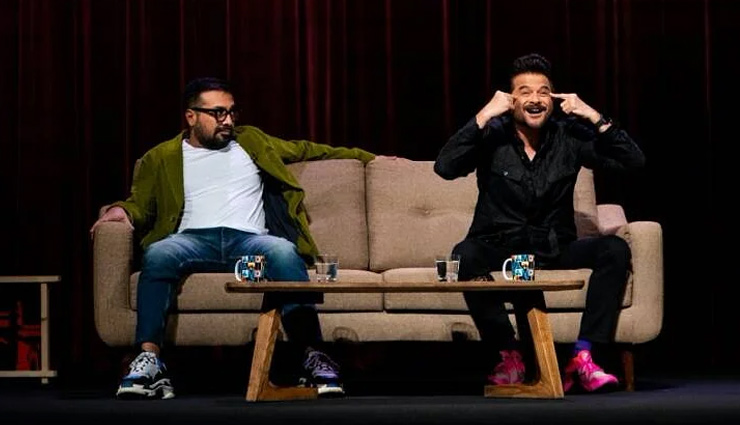 Anil Kapoor and Anurag Kashyap, who are all set to star in Vikramaditya Motwane's upcoming Netflix film, left Tweeple perplexed after having a war of words on the micro-blogging platform.

It all started when Kapoor took to Twitter to shower praises on International award-winning series 'Delhi Crime'.

"I've said it once and I'll say it again because they absolutely deserve it! Congratulations to the #DelhiCrime team! Nice to finally see more of our people get international recognition. @ShefaliShah_ #WelcomeToHollywood," read the 'Malang' actor's tweet.

Reacting to the same, Kashyap took a jibe at him and wrote, "Nice to see some deserving people get international recognition. Waise, aapka Oscar kidhar hain? No? Achha... nomination?"

Kapoor then tweeted, "The closest you have come to an Oscar is watching Slumdog Millionaire win Oscars on TV. #TumseNaHoPayega."

And just when netizens thought it was a fun banter between friends, Anurag's tweet left them scratching their heads!

The filmmaker tweeted, "Says the k-k-k-ing of hand-me-down films. Weren’t you the second choice for this film also?"

The closest you have come to an Oscar is watching Slumdog Millionaire win Oscars on TV. #TumseNaHoPayega https://t.co/sZzCDhVvAA pic.twitter.com/YhZHKrEFfO

"People who are puzzled by this back and forth between them.... There is a movie coming out which stars Anurag and Anil Kapoor.. Named... AK vs AK...in which Anil is playing an actor and Anurag is playing a Director," clarified another user.

For the unversed, Anil Kapoor and Anurag Kashyap starrer AK vs AK is set to release on Netflix soon.

Anil Kapoor had earlier shared on Twitter, “When @anuragkashyap72 decides to kidnap a kid for his next film, it’s time to show him ki baap baap hota hai!”

The synopsis of AK vs AK reads, “A brash film director (Anurag Kashyap) kidnaps the daughter of a movie star (Anil Kapoor) and films the star’s desperate search for his daughter in real-time as his next blockbuster.”

When @anuragkashyap72 decides to kidnap a kid for his next film, it’s time to show him ki baap baap hota hai! #AKvsAK @VikramMotwane Coming soon on @NetflixIndia pic.twitter.com/uJ8SI3bR6k