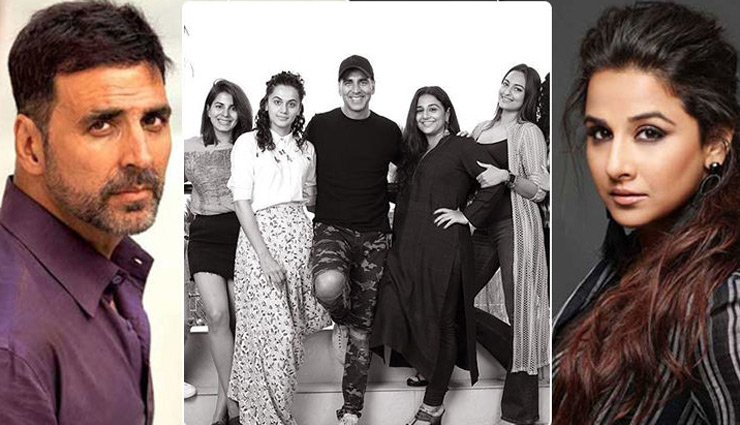 What is with films and controversies? Bollywood films invariably suffer ire from some fringe groups or CBFC and its a never ending saga. Now, according to reports, Akshay Kumar and Vidya Balan‘s ambitious project ‘Mission Mangal’ has found itself in legal trouble.

According to the report in the tabloid Mid-Day, US-based filmmaker Radha Bharadwaj has filed a lawsuit seeking to halt the production and release of Akshay Kumar and Vidya Balan starrer ‘Mission Mangal’. The case was filed in Mumbai on Wednesday.

Radha alleges that the R Balki production, which revolves around India’s 2014 Mangalyaan Mars Mission, infringes on the copyright of her original screenplay that she had shared with the producer and ace photographer Atul Kasbekar in 2016. According to Bharadwaj’s claims, Kasbekar’s studio — Ellipsis Entertainment — then shared the script with Vidya Balan, one of its clients, who is now doing another film based on the same premise.

Radha Bhardwaj then registered the script with the US Copyright Office in 2016 for the US and Indian market. Bharadwaj recently completed shooting her film titled ‘Space MOMs’. She is now alleging that the makers of ‘Mission Mangal’ are now sabotaging her project by commencing the work on ‘Mission Mangal’.

Bharadwaj told Mid-Day, “I’ll bet the details of the origin of this project were not known to Akshay Kumar, Fox Star or its US partners. But now that they know it, I ask them to act honourably. I have documentation going back to 2014 on my efforts to bring this story to screen.”

Looks like ‘Mission Mangal’ is facing legal trouble and hopefully all the warring parties will sort this out amicably. ‘Mission Mangal’, a space-based film, has an impeccable leading cast that includes names like Vidya Balan, Sonakshi Sinha, Taapsee Pannu along with Khiladi Kumar himself.

Proud and excited to bring the story of India’s Mars Mission, #MissionMangal to you. Coincidentally the mission was launched on this very date, 5th Nov. 2013. Meet the team and do share your best wishes for our shubh mangal journey. Shoot begins soon 🙏🏻 @foxstarhindi @sharmanjoshi #KirtiKulhari @taapsee @balanvidya @aslisona @nithyamenen