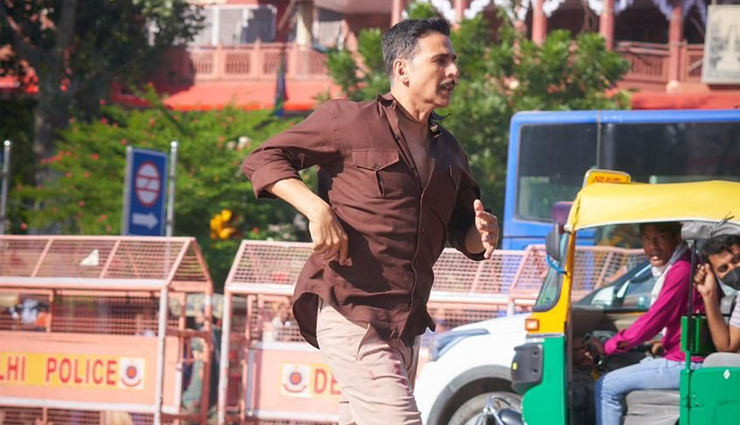 Shooting for 'Raksha Bandhan' at his birthplace Chandni Chowk, Delhi has ushered in a wave of nostalgia in superstar Akshay Kumar.
On Monday, Akshay took to Instagram and shared a glimpse of his shooting in front of the Red Fort.
"Today's morning run on the sets of #RakshaBandhan brought back so many memories as it was in my birthplace, Chandni Chowk. And how lovely it was to hear the chatter of the people around, never gets old," he captioned the post.

Akshay has a lot of fond memories attached to Delhi.
In August, during a promotional event for his film 'Bellbottom', Akshay recalled how he had once watched megastar Amitabh Bachchan's 'Amar Akbar Anthony' (1977) in a movie hall by buying a ticket in black.
"I have a lot of memories attached to theatres in Delhi. I was born in Chandni Chowk, where several movie theatres are located, including Delite Cinema. I had watched several movies there. I remember watching 'Amar Akbar Anthony' in the theatre by buying a ticket in black... it was raining heavily that day but I wanted to watch that film at any cost. Being a cinema lover, it was extremely important for me to watch that film. I failed to get a ticket to a theatre nearby my locality..so I had to go to Amba cinema where I watched 'Amar Akbar Anthony' in black," Akshay had said.
Coming back to 'Raksha Bandhan', the film, which is helmed by Aanand L. Rai, also stars Bhumi Pednekar. (ANI)