Bhool Bhulaiyaa 2: Kartik Aaryan Welcomes Tabu With A Quirky Post After She Refused To Shoot Due To COVID-19 Fear 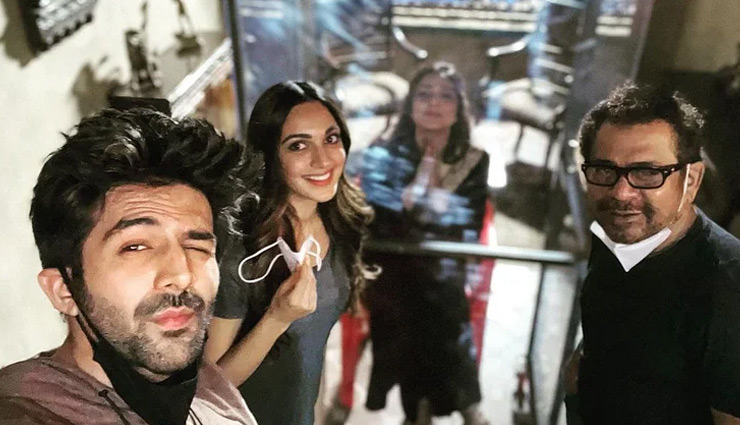 After Bollywood actors Kartik Aaryan and Kiara Advani, veteran actor Tabu has resumed the shoot for 'Bhool Bhulaiyaa 2' on Monday.

As Tabu rejoined the sets of 'Bhool Bhulaiyaa 2' today, Kartik welcomed the actor with a fun-filled quirky post.

The 'Pati Patni Aur Who' actor shared a picture from the set where he is seen taking a selfie with Kiara Advani, director Anees Bazmee and in the background, Tabu who is all ready to fill.

The actor added a witty caption for the click and almost candidly mocking the 'Haider' actor on her return, he said, "Welcome back #tabu ji But she refuses to come out of bubble, brings her own portable Z++Bio-Bubble to shoot #BhoolBhulaiyaa2 @advani_kiara @BazmeeAnees @MuradKhetani".

The post comes after Tabu, reportedly refused to join the shoot due to the fear of ongoing COVID-19 pandemic.

Meanwhile, on the work front, after wrapping 'Dhamaka' in mere 10 days pertaining to all safety protocols against Covid-19, Kartik has swiftly moved to shooting for 'Bhool Bhulaiyaa 2'.

The comic supernatural thriller will be helmed by Anees Bazmee, unlike the first one which was directed by Priyadarshan. The first part of the film was a remake of the Malayalam blockbuster 'Manichitrathazhu' which starred Akshay Kumar in the lead besides, other actors including Vidya Balan, Shiney Ahuja, and Amisha Patel.

'Bhool Bhulaiyaa 2' is produced by Bhushan Kumar, Murad Khetani, and Krishan Kumar under the banner of T-Series and Cine 1 studios.