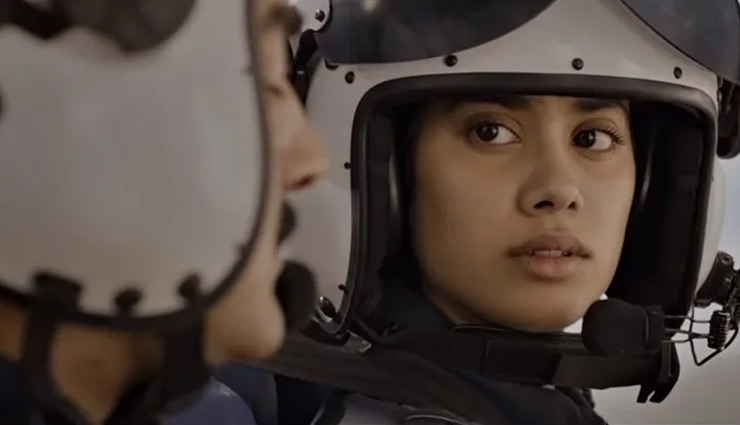 The makers of "Gunjan Saxena: The Kargil Girl" starring Janhvi Kapoor dropped the first trailer on Saturday. The film is inspired by the life of Indian Air Force combat pilot Gunjan Saxena, and stars Janhvi in the titular role. Saxena entered war zone during the 1999 Kargil War.

The 2 minute 41 seconds trailer begins with a young Gunjan aspiring to join the Indian Army just like her brother, essayed by Angad Bedi. Gunjan’s decision to join the Indian Air Force receives support from her father played by Pankaj Tripathi. However, reality hits her dreams when the training camp smothers her confidence with sheer sexism, which prevailed heavily back in the day.

From no ladies washroom to change her overalls to being constantly mocked by her superiors, Gunjan’s journey executed onscreen seems to be a promising watch. Directed by Sharan Sharma, the cast also features Viineet Kumar, Manav Vij and Ayesha Raza. The film will premiere on Netflix on August 12.

"‘Gunjan Saxena' is a defining film based on a true story about a woman who showed unparalleled courage, and inspiration to many in the coming years. We are excited to share this fearless story about following your heart and your dreams with millions around the world," Karan Johar, who has backed the film through his production house, Dharma Productions, said at the time of the announcement.

Gunjan calls herself lucky as Sharan and Janhvi are narrating her story.

"Everybody at my age has a story to tell. Lucky few like me have Sharan and Janhvi to narrate my story. None of the life journeys is a walk in park and mine was no different. But at times a one-track mind on goal does help. During my tenure in IAF, whatever little I could achieve was with the help of men and women in blue uniforms."