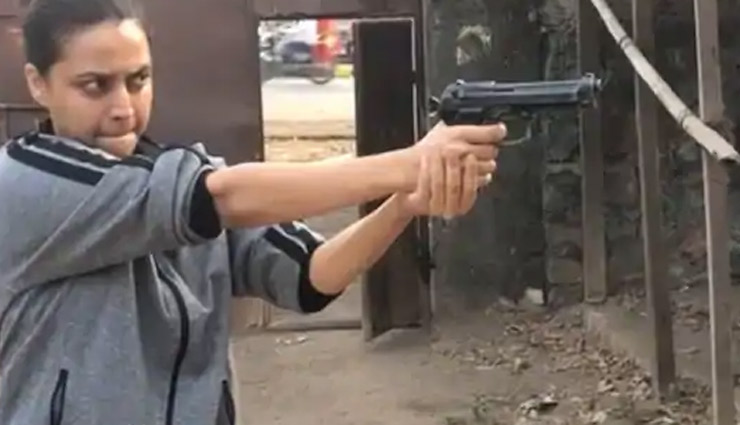 Actor Swara Bhaskar is all set to play a cop for the first time in her career in the upcoming web series Flesh that tackles human trafficking. Directed by Danish Aslam, the eight-episode series takes a tough look at ‘humans for sale’. The first trailer of Flesh is out and the series will release on Eros Now from August 21. The actress who will be essaying a cop’s character underwent special training.

In one of her recent social media posts, Swara shared a behind-the-scenes video straight from the sets of the show. She is seen trying to shoot from a gun which seems to have gone wrong. Swara learns a lesson in the rehearsal clip after firing blank cartridges. She ends up feeling a brief deafening pain in an ear due to the sharp loud burst of sound produced by the gunshot.

While sharing the hilarious throwback on Instagram, Swara wrote, “The first gun training session for #flesh #fleshwebseries ! Suffice it to say- there’s a reason.. a very good reason why I’m not a cop!!!!! #throwback #bts #asliyat #aukaat”

In the upcoming digital project, Swara will be seen performing some high-octane action sequences.

Swara opened up about the storyline in a statement, “Human and child trafficking is one of the most damning realities of the world and it’s important that we keep highlighting the issue through the fictional content that we create. I am honoured to be a part of Flesh and being given the opportunity to work with the team was an absolute pleasure!”

The crime-thriller will also star Akshay Oberoi, Vidya Malvade and Mahima Makwana in pivotal roles. Flesh is directed by Danish Aslam and written by Pooja Ladha Surti. The series will stream on Eros Now, August 21 onwards.

On the big screen, Swara’s last movie outing was the coming of age drama Veere Di Wedding. Her next film, Sheer Qorma with Divya Dutta is a love saga of a homosexual couple who try to break societal norm for their love to succeed. The trailer of the LGBTQ romance released in February and was set to premier in London in March or April. However, the pandemic derailed the plans and no new date has been announced yet.