5 Beautiful And Grand Hotels To Stay In India 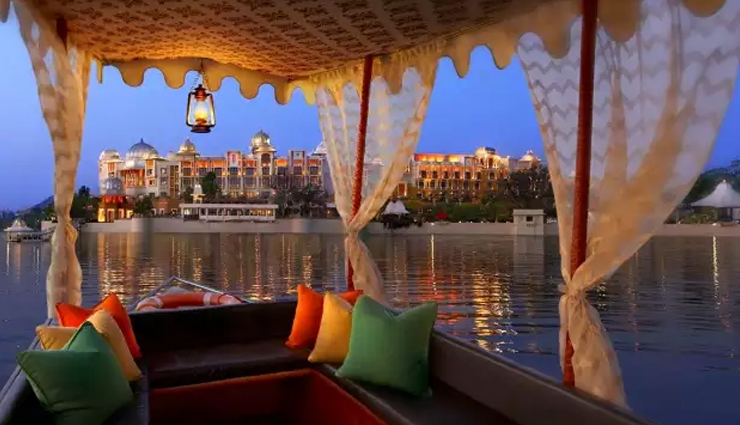 India is a diverse country with a rich cultural heritage. One way to experience this richness is by staying in literal palaces that have been converted to hotels. Yes, some of India’s best palaces now welcome guests to live the life of Maharajas who once inhabited them. These royals had grand lifestyles and uber expensive homes that were re-structured by their heirs and turned into palatial hotels. With diverse themes and exuberant packages, hotels have completed revamped their identity today.

While Rajasthan holds the distinction of the largest number of these properties, we are looking at other palace hotels outside Rajasthan. Here are some of the most beautiful and grand palace hotels of India. 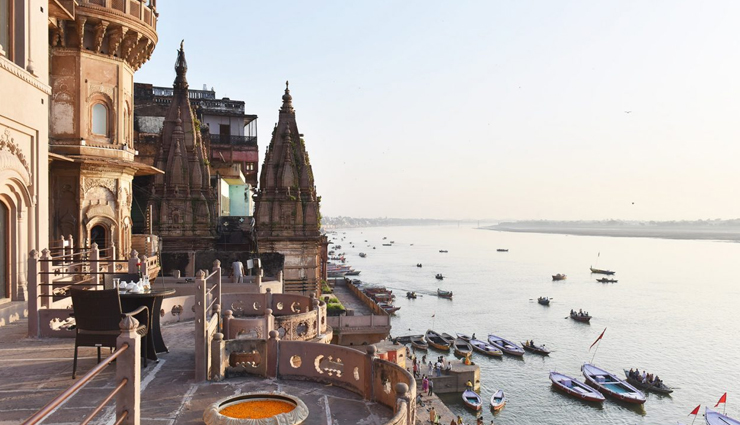 The Brijrama Palace, Varanasi, offers a discerning traveller the opportunity to have the best of both worlds – the luxury of the material world and the soothing calm of the spiritual world. Conveniently perched on the banks of the sacred Ganga, on the Darbhanga Ghat, the Brijrama Palace, is one of the oldest landmarks of the city. The history of the palace dates back to the year 1812, in which it was built by Shridhara Narayana Munshi’ the then minister for the estate of Nagpur. In 1915, the Brahmin King of Darbhanga (Bihar) Rameshwar Singh Bahadur acquired the palace and the Ghat also came to be known as Darbhanga Ghat.

At first, the exterior of the hotel seems to blend in with the ancient architecture of the myriad temples and havelis that dot the 87 ghats on the Ganges. But the first introduction to the kind of heritage it encapsulates between its domes and arches is as soon as you set foot in its 200-year-old elevator. First installed in 1918, the elevator, built to help the Darbhanga king climb the second floor of the palace, also boasts of being the first elevator of India. Just about five years ago, the abandoned and derelict structure was infested with bats and snakes and how over a four-year period, it was painstakingly restored, while keeping the essence of the original architecture intact.

There are pictures that corroborate this and mind you – it is something that will make you admire Brijrama Palace even more. The architecture and the design of the palace are directly influenced by the erstwhile ruling dynasty of the Marathas. The sandstone walls and pillars graced with Maratha art accentuate the palace architecture. All the rooms have been tastefully done with a traditional Banarasi touch. Traditional lamps, beautiful paintings adorn the walls of the rooms. You can spot plenty of original artworks from the 18th-century gracing the walls and pillars of the hotel. The interior is choc-a-bloc with beautiful antiques and exudes sumptuous serenity. This lesser-known hotel is a guarded secret, but definitely a must-visit. 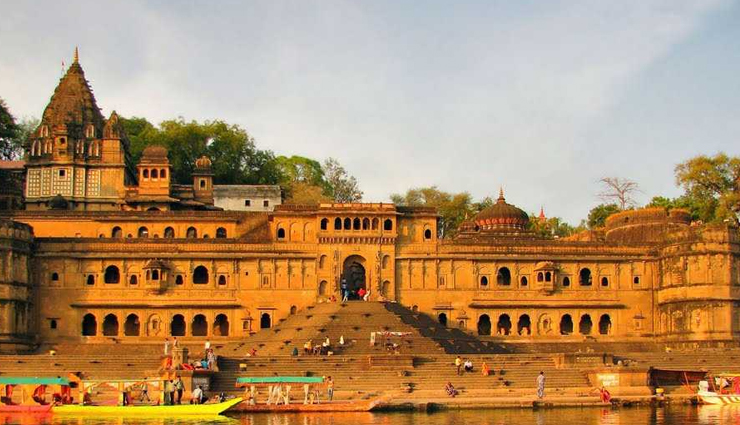 Ahilya Fort in Maheshwar (famed for Maheshwari sarees) allows you to experience the opulence of a bygone era – whether it is through 19 rooms set in six buildings that date back to the 18th century or three humongous acres of courtyards dotted with fountains or gardens, or having a meal on the mandap sit-out overlooking the River Narmada below. You can even play petanque in the court near an expansive pool where the game is played with 18th-century cannonballs. The erstwhile residence of Maharani Ahilyabai Holkar (who ruled here from 1765 to 1796 and built Ahilya Wada, her personal residences, offices, and darbaar audience hall, within the fort), the Ahilya Fort Hotel was modified in the year 2000 by Prince Richard Holkar, son of the last Maharaja of Indore. 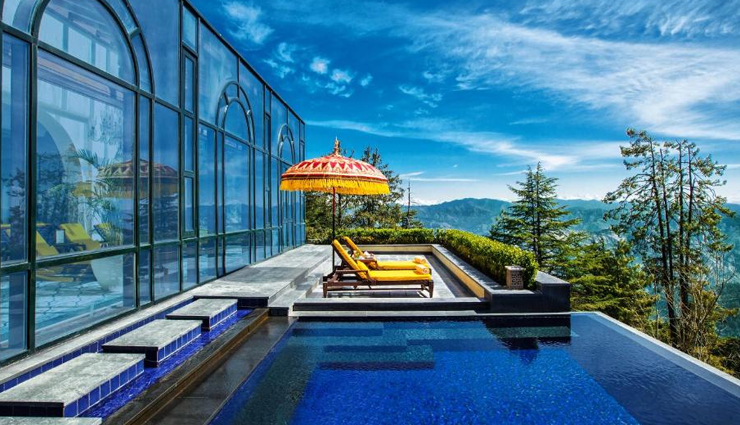 Situated at 8,000 feet above sea level, Wildflower Hall is unique amongst luxury hotels in India. Once home to Lord Kitchener during the rule of the British Raj, Wildflower Hall recreates the grand style of the colonial era in the Himalayas. Wildflower Hall exudes the ambience of a colonial Hill Station home, with luxurious rooms, a welcoming lounge, a bridge room and a library. Filled with original artwork and wood paneling the hotel creates an aura of old world charm and provides a panoramic view of snow covered peaks.

Adorned with antique war memorabilia, our Cavalry Bar is a wonderful setting for an aperitif, a nightcap or to enjoy an interactive history session, while the intimate Lutyens Hall is perfect for private dinner parties. The Lord Kitchener Suite features a spacious living room with an open fireplace, rich handmade rugs, paisley print sofas and a panoramic view of the Himalayas. 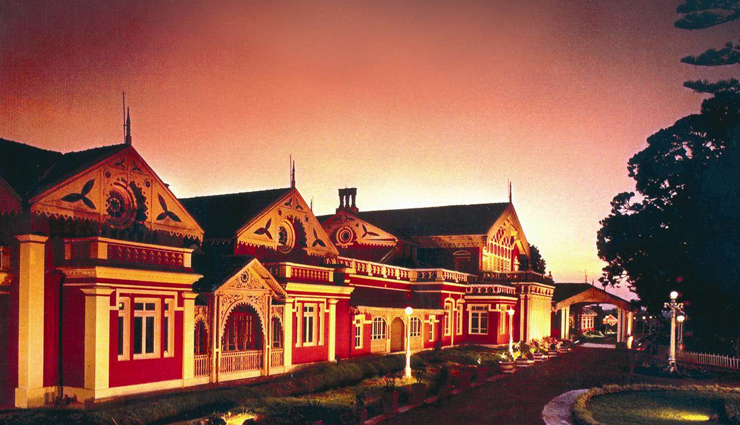 Fernhills Palace was built in 1844 by Capt. F. Cotton. as a summer Palace of the Mysore Maharajas. This property was bought by a 12 year old prince who bought the then 40 acres of Fernhills property for Rs. 10,000. In 1873 His Highness Chamarajendra Wadiyar X became the first Indian Royal to buy an English holding in Ooty. Since then Ferrnhills Royale Palace has been with the Wadiyar dynasty and today it is successfully run by Her Highness Promoda Devi. The Palace is spread out over 50 acres of green lawns, stylized and beautifully laid out gardens and dense woods with views of terraced tea gardens and lush verdant valleys of the Nilgiri Hills. Resembling a Swiss Chalet, the carved wooden bargeboards and ornamental cast iron give Fernhills a characteristic appearance. The palace grounds accentuate the alpine look of the place with its manicured gardens, firs and cedars. 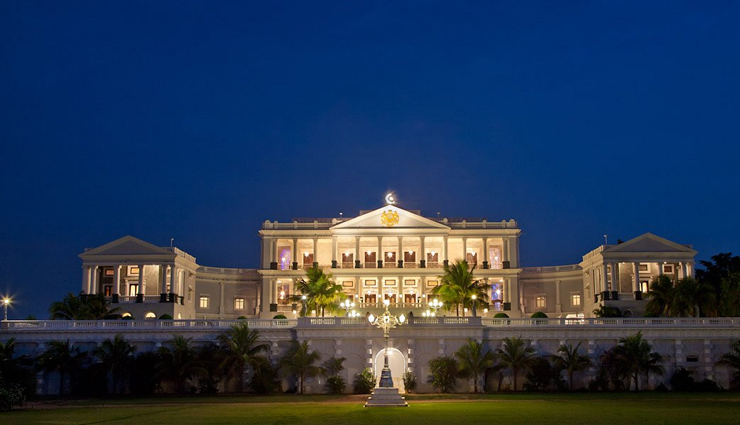 Previously the residence of the Nizam of Hyderabad, Taj Falaknuma Palace sits on a hill 2,000 feet above overlooking Hyderabad and is lauded as one of the most beautiful palaces in India. Built in 1894, it is the former palace of the Nizam, rumoured to be the richest man in the world at one time. Overlooking the twinkling City of Pearls, this enchanting palace exudes romance and grandeur that take one back to when the Nizam ruled Hyderabad. Entirely built of Italian marble, the incomparable Palace boasts of large Venetian chandeliers, rare furniture, grand marble staircases, priceless statues and artworks, a world-class collection of crystals and Mughal, Rajasthani and Japanese gardens personally conceived by the Nizam. From the moment you arrive at Taj Falaknuma Palace in a horse-drawn carriage, the palace butlers treat you like royalty.