5 Major Mountain Ranges In The World 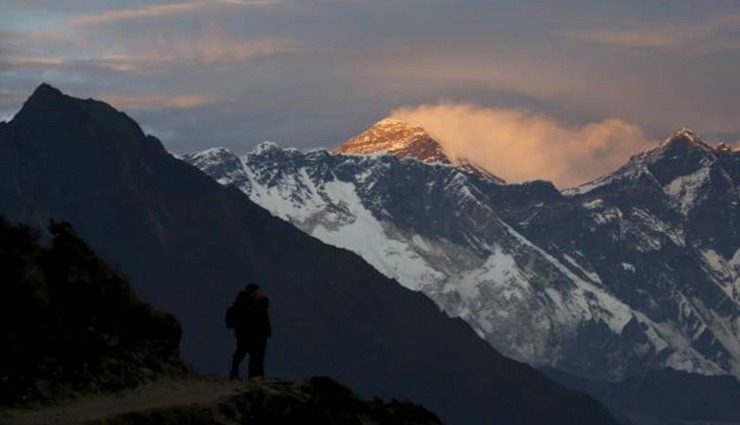 A mountain range is a group or series of mountains that are connected by high ground, to form a long line of mountains. The mountains in this sequential chain are formed at a similar time of earth’s history, and by the same process as well. Mountain ranges are formed by a variety of geological processes, but most of the significant ones on our planet are the result of a shift of the tectonic plates of the Earth’s lithosphere. These ranges are usually separated from other mountain ranges, by passes and rivers. Listed below are the world’s major mountain ranges and why they command our respect. 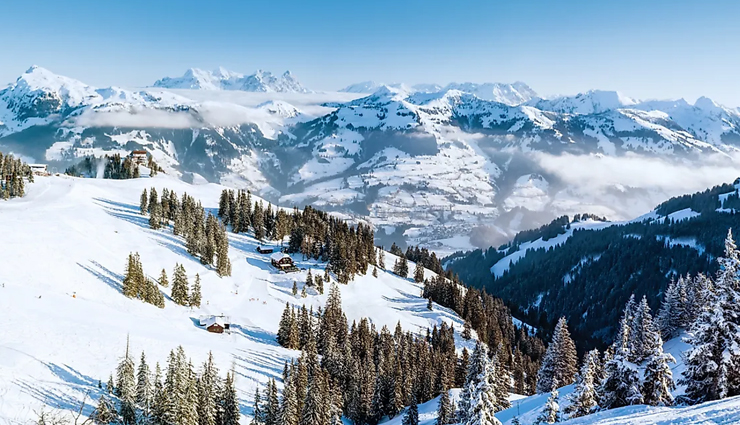 This vast mountain system is located in south-central Europe and was formed due to the collision of the African and Eurasian tectonic plates. The Alps cover 192,000 square kilometres of land, and are 1,200 kilometres in length, and more than 201 kilometres in width. The Alps are a folded mountain range and pass through eight alpine countries namely France, Switzerland, Monaco, Italy, Liechtenstein, Austria, Germany, and Slovenia. This mountain range is the highest and most extensive mountain range system in Europe that includes several hundred peaks and glaciers, including numerous peaks over 12,000 feet, with Mont Blanc, located on the French-Italian border being the highest at 15,771 feet. Known as the most prominent physiographic region in western Europe, the Alps are responsible for major geographic phenomena. Some of these include being the source of many of Europe’s major rivers, such as the Rhône, Rhine, Po, and numerous tributaries of the Danube. Some of the best sites for you to see the Alps would be Lucerne (Switzerland), Gran Paradiso National Park (Italy), Maggiore (Italy) and Chambéry (France). 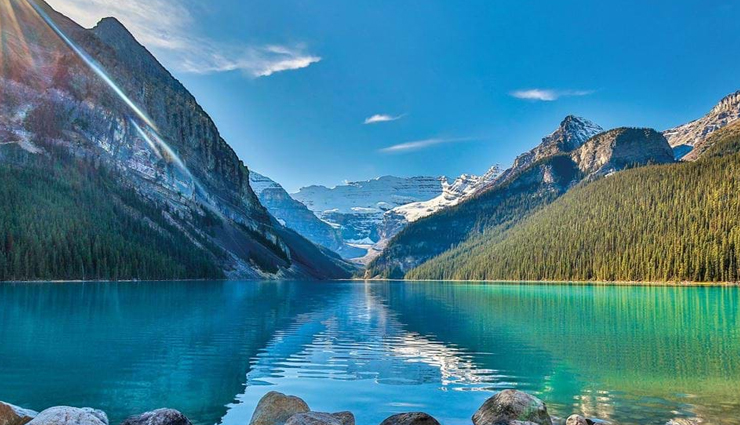 Rocky Mountains, also fondly called the Rockies, is a massive cordillera (a system or group of parallel mountain ranges together with the intervening plateaux and other features) from north to south in western North America. Stretching more than 4,800 km, the Rockies are spread from the northernmost part of British Columbia, in western Canada all the way up to New Mexico, in southwestern United States. This vast mountain system also encompasses over 100 separate mountain ranges (stretching from Alberta and British Columbia to New Mexico) rather than just one range. The highest peak in the Rockies is Mount Elbert, in Colorado, which is 14,440 feet. Passing through northern New Mexico and into Colorado, Wyoming, Idaho, and Montana, the Rockies also has many different parks and reservations, such as Banff, Jasper, and Kootenay National Parks in Canada and the Glacier, Rocky Mountain, and Yellowstone National Parks in the US, to name a few. Some of the best spots to see the Rocky mountains are The Icefields Parkway, Lake Louise and Glacier National Park. 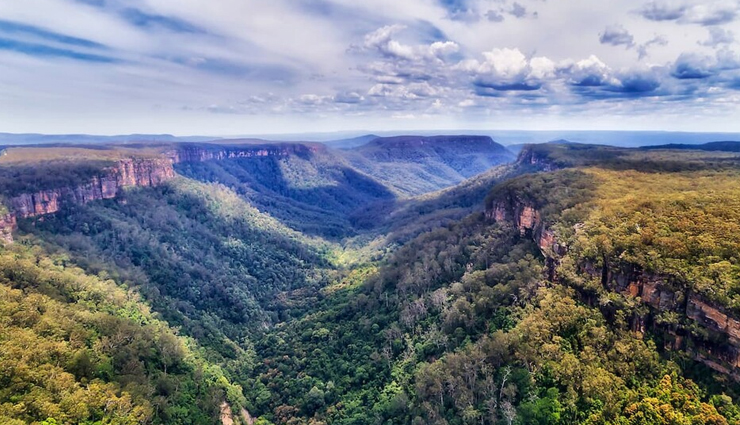 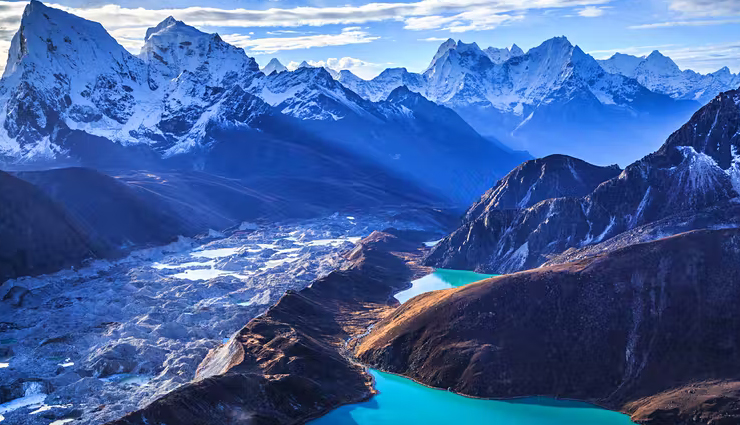 This great mountain system in Asia is the highest mountain range in the world and one of the youngest. Home to the planet’s highest peaks, the Himalayas formed due to the result of the collision between the Indo-Australian and Eurasian tectonic plates which began 50 million years ago and continues today. This vast mountain range, also referred to as the Third Pole, covers approximately 2,400 kilometres, and varies in width from 400 kilometres in the west to 150 kilometres in the east. Stretching through much of central Asia, the Himalayas pass through India, Pakistan, Afghanistan, China, Bhutan and Nepal. The name Himalaya is coined from Sanskrit meaning hima (snow) and alaya (abode). This great mountain system has held a profound significance for the people of South Asia, which their literature, mythologies, and religions, including Buddhism and Hinduism, reflect. These young fold mountains in Asia separate the Indian sub-continent from the Asian plains and also include the two tallest peaks in the world: Mount Everest at 29,035 feet and K2 at 28,251 feet. Some of the best places to witness the highest mountain ranges in the world are Zanskar Valley, Mount Apharwat, Goecha La, Kaghan Valley and Kala Patthar. 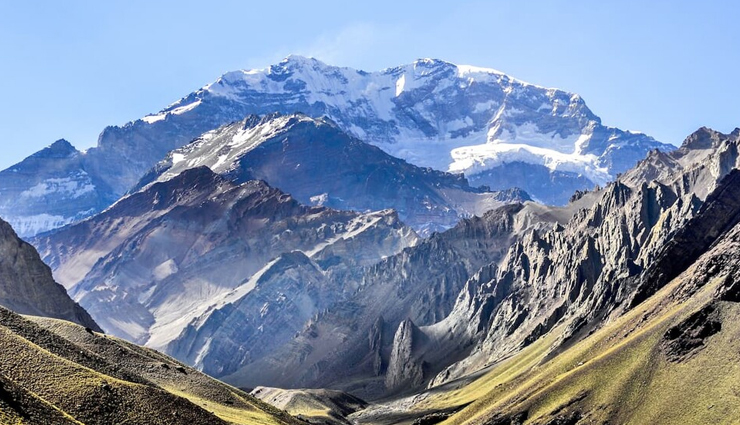 The second highest mountain range in the world, the Andes or Andean Mountain Range is located in South America, running north to south along the western coast of the continent. Stretching approximately 7,000 kilometres long, the Andes Mountains make up the longest continental mountain range in the world. It was formed by a continuous highland along the western edge of South America and features a succession of parallel and transverse mountain ranges, or cordilleras, mixed with intervening plateaus and depressions. As the Andes lines the western edge of South America, it covers seven South American countries: Venezuela, Colombia, Ecuador, Peru, Bolivia, Chile, and Argentina. The Andes contain the highest peaks in the Western Hemisphere (with an average height of 4000 metres) along with the world’s highest volcanoes. The highest peak of Andean mountain range is Mount Aconcagua (22,831 feet (6,959 metres) located on the border of Argentina and Chile. Best spots to see this majestic mountain range would be: Machu Picchu, Torres Del Paine and Cusco.

Tags :
mountain ranges in the world,
the alps,
the rockies,
the great dividing range,
the himalayas,
the andes