5 Temples In South India You Cannot Miss To Visit 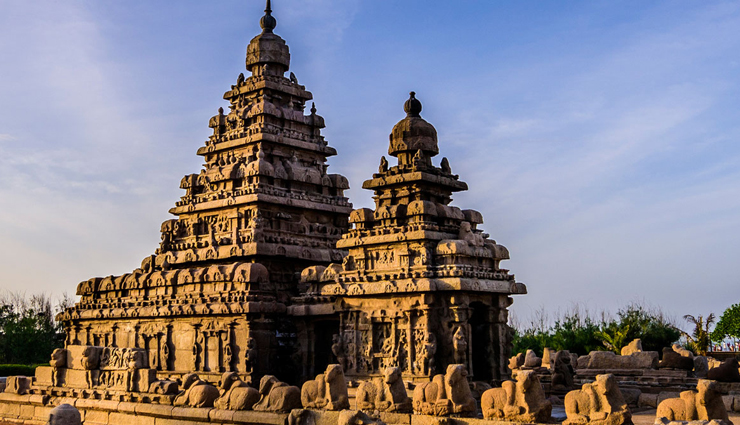 Standing tall and majestic since ancient times, the monuments of South India form a breath-taking sight, telling tales of the past with a unique fervour. Many people tend to opt for a South India tour package so they can enjoy the tranquil environs of the south, laze around on the magnificent beaches, or explore the reaches of the beautiful backwaters. However, that does not mean that you should forget about the famous temples in South India. More than religious destinations, these temples are a shining example of the varied forms of architecture that have been impacted by several historic dynasties over a period of several years.

Many historians consider the South Indian temples to be the finest devotional monuments to be constructed. With carved gopurams, larger than life statues, and the most intricately carved spires, here are the top 5 temples in South India that you should visit at least once: – 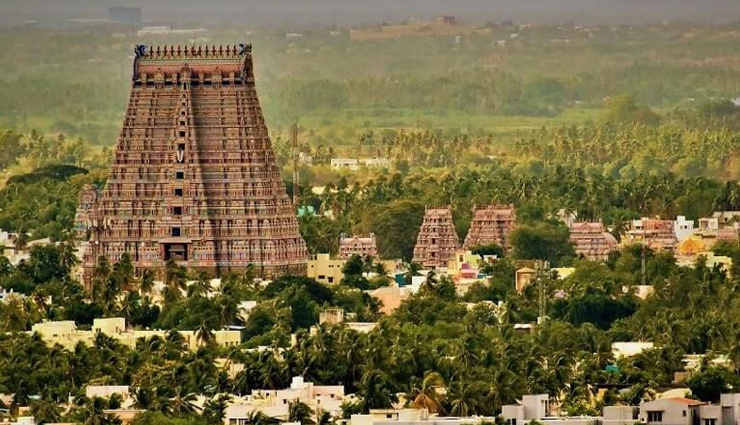 The biggest temple in South India, Srirangam is the foremost of the self-manifested shrines (Swayam Vyakta Kshetra) of Lord Vishnu. Also known as the Ranganathaswamy Temple, it is located on an islet that is formed by the rivers Cauvery and Coleroon. Exhibiting a beautiful form of Dravidian architecture, the temple holds a lot of religious significance. Counted as one of the grandest South Indian temples, Srirangam dwells in ethereal surroundings, covered in an illustrious yet serene aura. The temple boasts of a Sapta-Prakaram formation that surrounds the sanctum sanctorum and follows the Thenkalai tradition of Sri Vaishnavism. Covering an area of around 156 acres, this is the biggest temple in South India and also encompasses an entire temple town settlement. Apart from religious importance, the town is also an epigraphical and archaeological site that offers visitors a window into the South Indian culture and society of the early and mid-medieval times. 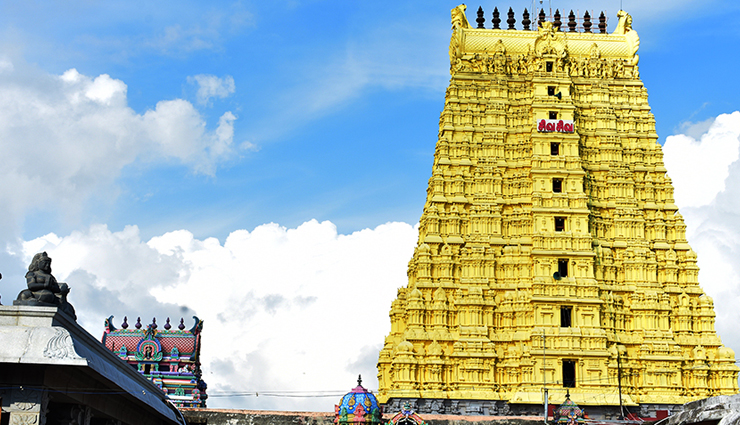 Dedicated to Lord Shiva, this temple in South India is home to one of the 12 Jyotirlingas in the country. The presiding deity in the temple, which is said to have been worshipped by Lord Rama, is a Lingam of Ramanathaswamy or Shiva. The temple has many spectacles for one to behold. Designed in the Dravidian style of architecture, the temple also houses the longest temple hallway in India which has 4000 pillars. This Shiva temple in South India also houses a statue of Nandi, Lord Shiva’s bull. The statue is 17 feet in height and 12 feet wide, making it one of the biggest manifestations of Nandi. This South Indian mandir was built in the 17th century and since then has garnered wide-spread fame. However, before you visit the temple, you should know that there are strict dress codes that are to be observed, and attire like Bermudas, tight leggings, jeans, and lungis are not allowed. 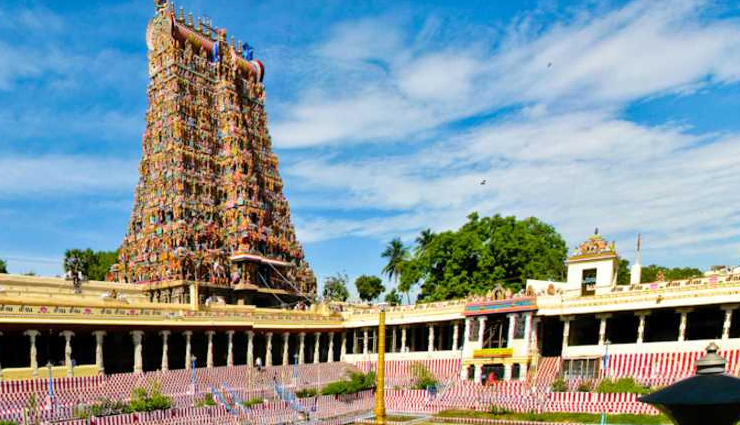 One of the oldest temples in South India, the Meenakshi Temple is a marvel of medieval architecture in India. It is believed that the original foundation of the temple was laid by Lord Indra in the 1st century. Later, the temple was destroyed by an invader, Malik Kafur, in the 14th century and the present structure that stands was built in the 16th century. This South Indian mandir also hosts the annual Tirukalyanam Festival which takes place over 10 days and sees more than a million visitors during the time. With architectural elements like Meenakshi holding a parrot and the raised leg pose of Nataraja that are more than enough to keep one spellbound, the temple complex also has 14 brilliant gopurams, including two golden gopurams. One of the most famous temples in South India, the Meenakshi Amman Temple is an epicentre of culture and religion and a popular landmark in the southern states of India. 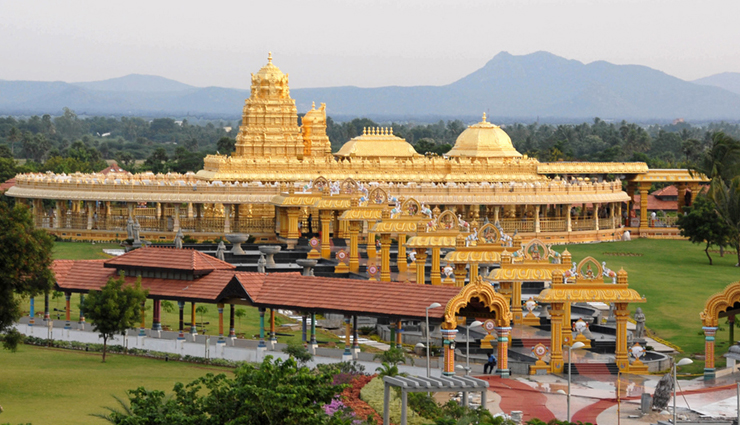 The Laxmi Narayani Temple is dedicated to the goddess of wealth, Laxmi, and is located in the foothills of the Western Ghats where it sits atop a massive stretch of lush greens. This is one of the South Indian temples with names that showcase what it says. It was built using gold foils and layers which was how it earned its moniker of the Golden Temple in South India. With finely inscribed pillars standing proud and intricate carvings gracing the ceilings, the temple is not just a good place to visit for its ritualistic significance but is a popular tourist attraction as well for the sheer excellence of architecture. 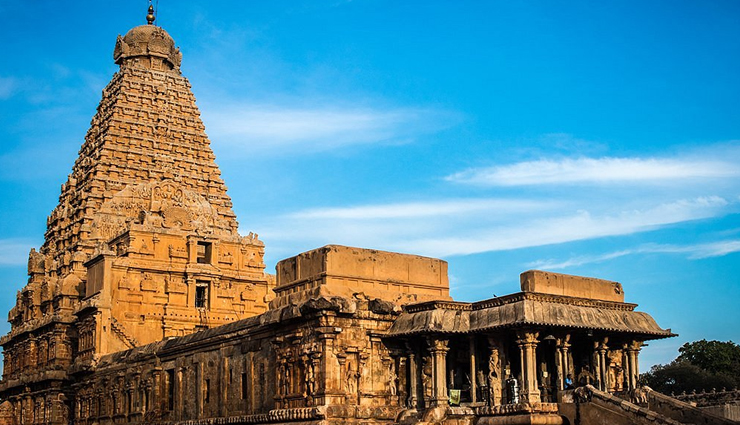 Located in the city of Thanjavur, this is one of the South Indian temples with names in the list of World Heritage Sites by UNESCO, which is a mark of the temple being one of the biggest achievements of Chola architects. Built in the Dravidian style of architecture, Brihadeeswarar Temple is one of the Great Living Chola Temples and one of the most visited religious sites in Tamil Nadu. One of the oldest temples in South India, it is a notable fact that the temple casts no shadow on the ground when the sun is at its pinnacle.

Apart from showcasing a splendid architectural design, the temple houses statues of Ashtadikpaalakas, or the Guardians of the directions – Agni, Indra, Nirrti, Kubera, Varuna, Yama, Isana, and Vaayu. Another feature because of which the Brihadeeswarar Temple is counted among the best temples in South India is that it houses a number of pillars that are quite famous for their acoustics. Each of these pillars produces a different musical note when it is tapped.