6 Most Beautiful Skybridges In The World 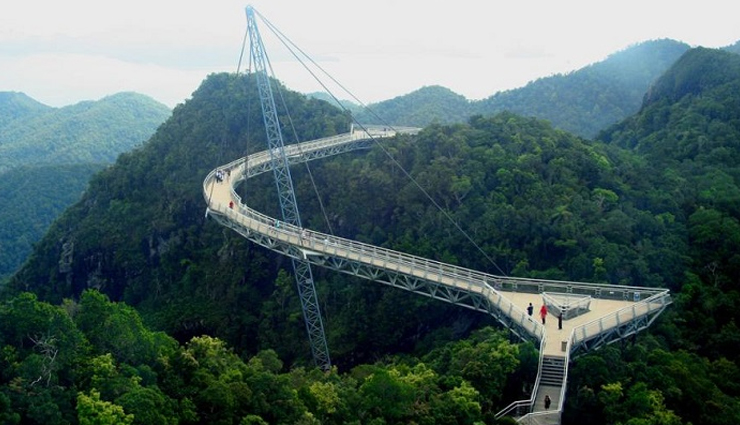 A skybridge is a type of pedway consisting of an enclosed or covered bridge between two buildings. This protects pedestrians from the weather. However, with the development of architecture and construction in the past few decades, the look and purpose of the skybridges are to some extent changed. So today we can see that in addition to the basic functions it perform, these unusual constructions serve, also, as a observation platforms, luxury hospitality facilities, and works of art. 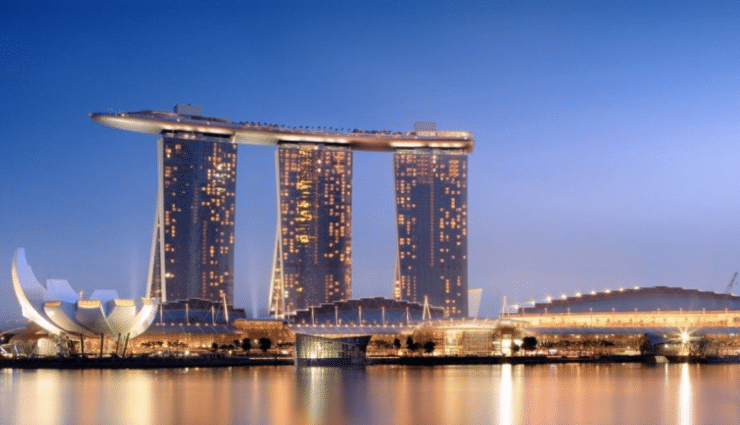 Marina Bay Sands features three 55-story hotel towers which were topped out in July 2009. The three towers are connected by a 1 hectare (2.5 acres) skybridge on the roof, named Sands SkyPark. The SkyPark is home to the world's longest elevated swimming pool, with a 146-metre (478 ft) vanishing edge, perched 191 metres (626ft) above the ground. The pools are made up of 422,000 pounds of stainless steel and can hold 376,500 gallons (1424 cubic metres) of water. 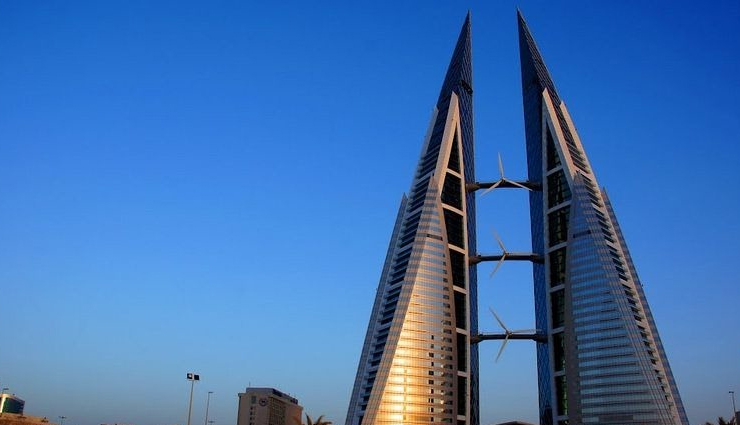 The Bahrain World Trade Center (also called Bahrain WTC or BWTC) is a 240-metre-high (787 ft), 50-floor, twin tower complex located in Manama, Bahrain. The two towers are linked via three skybridges, each holding a 225kW wind turbine, totalling to 675kW of wind power capacity. Each of these turbines measure 29 m (95 ft) in diameter, and is aligned north, which is the direction from which air from the Persian Gulf blows in. The sail-shaped buildings on either side are designed to funnel wind through the gap to provide accelerated wind passing through the turbines. 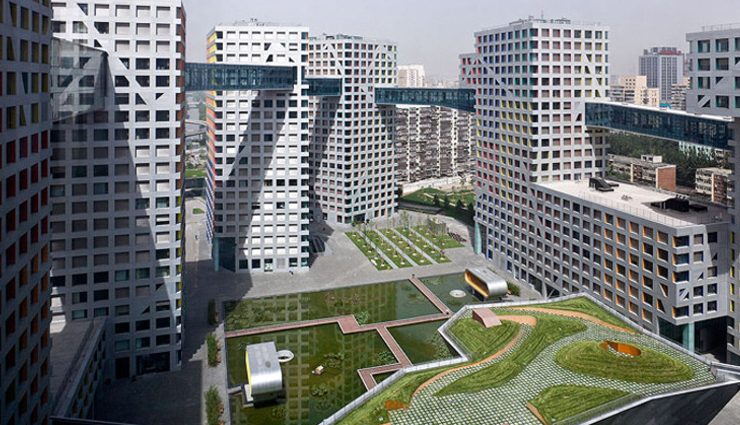 The 220,000 square-meter (54.5 acres) Linked Hybrid complex includes eight towers linked by a ring of eight sky bridges housing a variety of public functions. The complex is located adjacent to the former city perimeter of Beijing. To counter current urban development trends in China, the complex forms a new twenty-first century porous urban space, inviting and open to the public from every side. 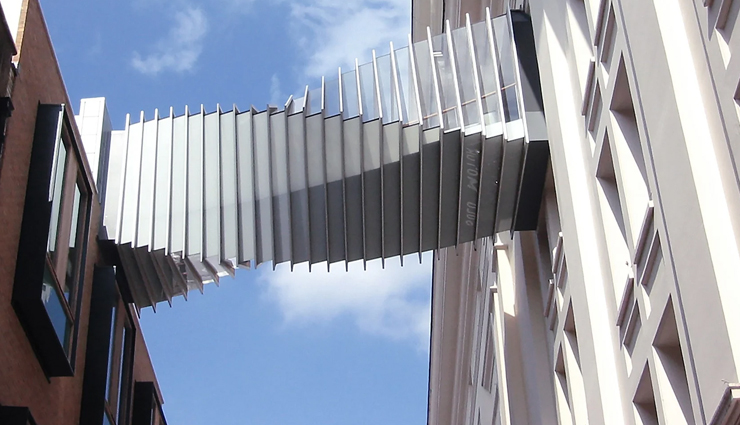 Twisting high above Floral Street in London, the Bridge of Aspiration provides the dancers of the Royal Ballet School with a direct link to the Grade 1 listed Royal Opera House. The award-winning design addresses a series of complex contextual issues, and is legible both as a fully integrated component of the buildings it links, and as an independent architectural element. The skewed alignment and different levels of the landing points dictate the form of the crossing, which is geometrically and structurally simple. A concertina of 23 square portals with glazed intervals are supported from an aluminium spine beam. 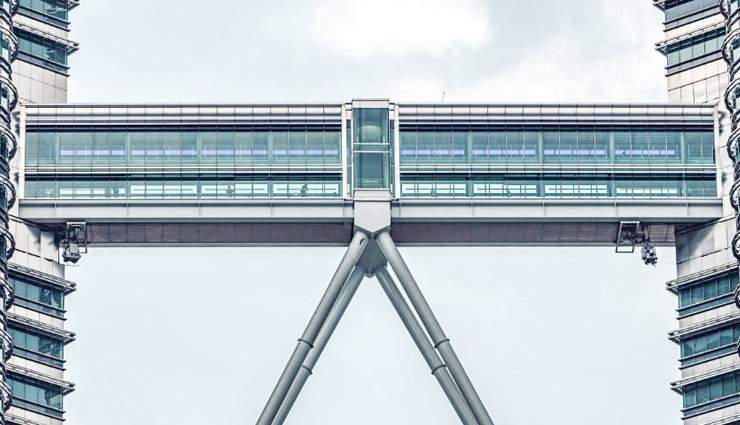 The towers feature a double decker skybridge connecting the two towers on the 41st and 42nd floors, which is the highest 2-story bridge in the world. It is not attached to the main structure, but is instead designed to slide in and out of the towers to prevent it from breaking, as the towers sway several feet in towards and away from each other during high winds. It also provides some structural support to the towers in these occasions. The bridge is 170 m (558 ft) above the ground and 58 m (190 ft) long, weighing 750 tons. The same floor is also known as the podium, since visitors going to higher levels have to change elevators here. 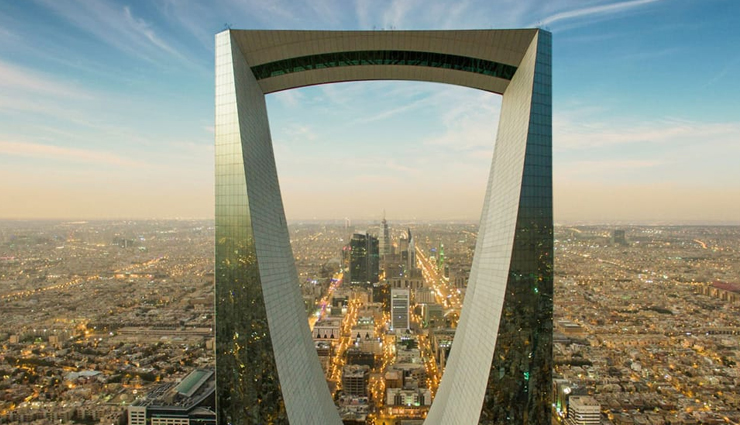 Kingdom Centre is a 99-storey, 302.3 m (992 ft) skyscraper in Riyadh, Saudi Arabia. It is the second tallest skyscraper in the country, and the world's third tallest building with a hole after the Shanghai World Financial Center and Tuntex Sky Tower. Extending 65 meters (213ft) in length, the SkyBridge which is a steel structure weighting about 300 tons sits on top of the 300 meter (985ft) height tower, rising 918 meter (3,010ft) above sea level and overlooking the whole of Riyadh, its unique position gave it the advantage of being one of the most important attraction point for tourism in KSA.