6 Must Visit Hoysala Temples That Are Noteworthy And Lesser Known 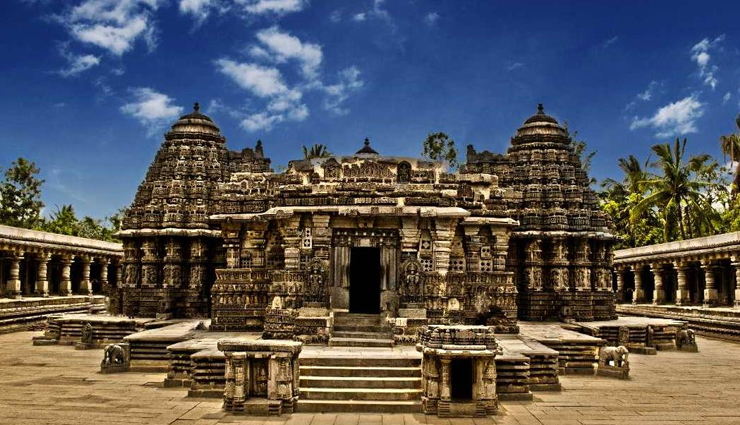 The Hoysalas ruled around modern-day Karnataka from the 11th-13th century. They were great patronage of arts, literature, and religion. They are known for their excellent temple architecture. Belur, Halebidu, and Somnathpura are prominent places where Hoysala temples were built with exemplary excellence.

After visiting Chennakesava Temple in Belur, I was too excited to visit all other important temples constructed during the Hoysala reign. There are around 92 Hoysala temples spread across the state. The majority of them are located in Hassan, Mysore, and Mandya districts. We chose Hassan as our center point to visit them. 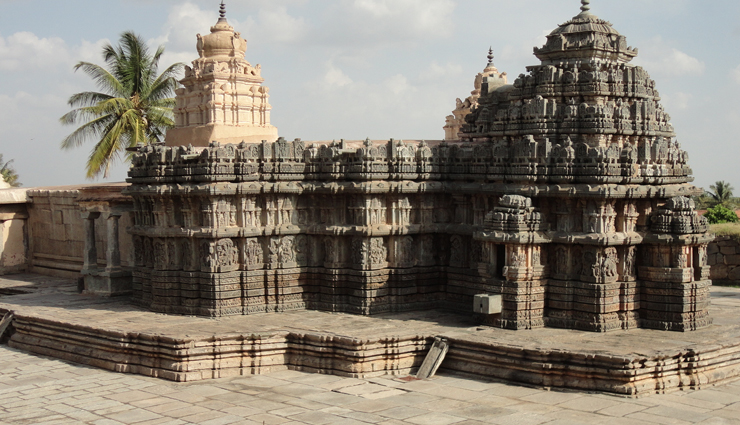 Nugehalli is a small village located in Channarayapatna taluk of Hassan district in Karnataka. It has two of the important Hoysala Temples.This temple was built by Bommanna Dandanayaka, a commander of Hoysala King Vira Someshwara in 1246 AD. It is a Trikuta temple with three Shikharas and constructed on a raised platform or Jagati, a characteristic feature of the Hoysala architecture. The three sanctums house the images of Chennakesava on the west, Venumadhav on the south and Laxmi Narasimha on the north. The three shrines open into a common Navrang mandapa. While the western shrine of Chennakesava has a Sukanasi, the other two opens directly into the Navrang mandapa. There is a circular raised platform in the middle of the mandapa supported by four pillars. 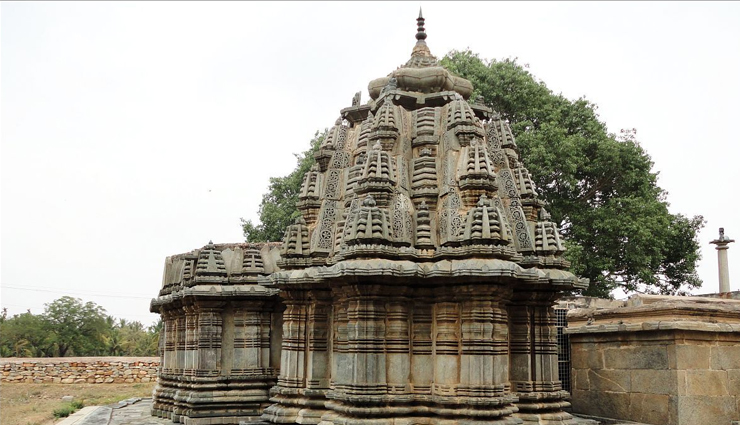 Sadashiva temple is another architectural masterpiece of the Hoysalas. The Mahadwara flanked by two Dwarapalas leads to a pillared hall. Steps leading to the raised Jagati has two beautifully sculpted elephants on either side. It is an Ekakuta temple with one Shikhara or Vimana. Garbhagriha has a big Shiva Linga connected to Sukanasi and Navranga mandapa with a raised circular platform is in the center called Darshana mandap. Nandi mandapa is a closed chamber with a lovely sculpture of Adishesha. 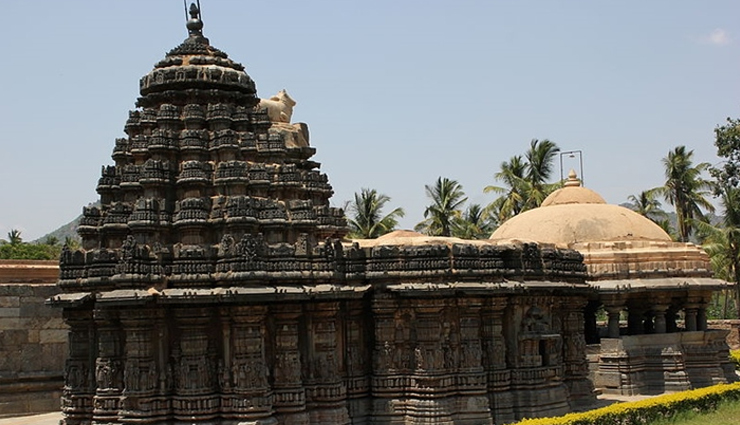 Arasikere is a small town in the Hassan district of Karnataka. It is famous for the Hoysala period Ishwara temple. Arasikere literally means “Queens Tank” in Kannada. Arasi means queen or princess and kere means lake. Ishwara Temple dedicated to Shiva is an Ekakuta temple with one shikhara, two mandapas-one open and another closed. The interior structure has Garbagriha, Sukanasi, Darshana mandapa, and a Natya mandapa. The Natya mandapa is a circular closed structure supported by 21 lathe pillars and an irregular star-shaped dome. The ceiling is intricately carved in the shape of an inverted lotus. A raised platform is constructed for seating purposes supported by small elephant structures at the base. 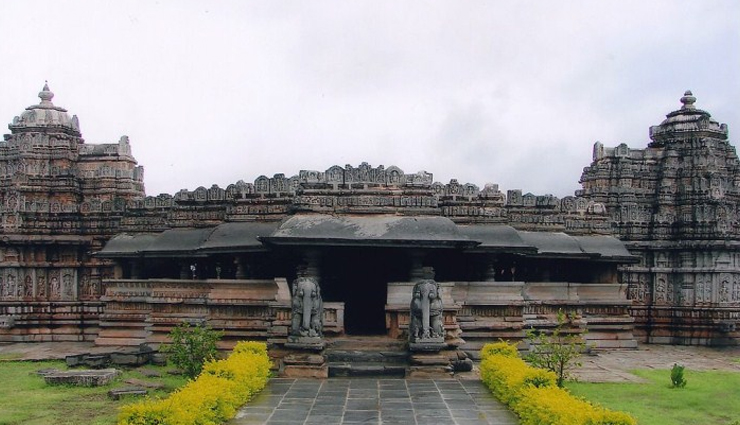 Belavadi is located close to Halebidu in Chickmagalur district of Karnataka. This place is referred to as Ekachakranagar in Mahabharat. It is said that here Pandava prince Bhima killed the demon Bakasura. The town is famous for another Hoysala Temple-Veer Narayan Swamy Temple. It is a Trikuta temple and the central shrine belongs to Veer Narayan Swamy with Venugopal on the left and Yoganarasimha to the right. Two carved elephants flank the entrance. 8 ft tall Chaturbhuj Veernarayan Swamy carved on Saligrama in stone stands on an open lotus flanked by Shridevi and Bhudevi on his sides. Ten avatars of Vishnu are carved on the top. 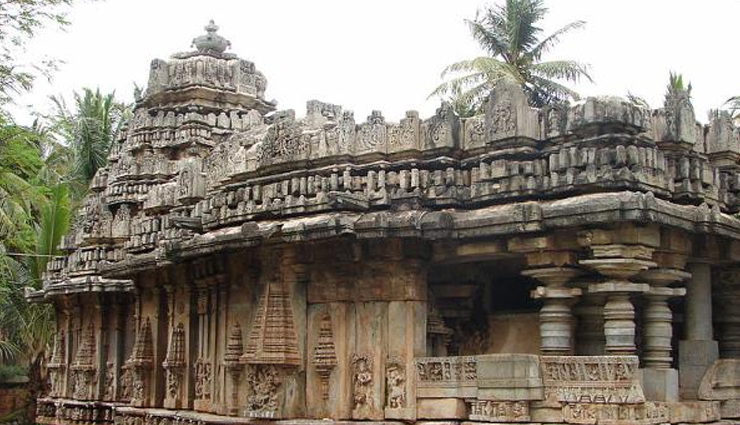 The Brahmeshwar Temple is another masterpiece of Hoysala architecture located close to a scenic big lake. This Ekakuta temple dedicated to Shiva is in a dilapidated condition as it is not maintained by ASI, though we did witness some restoration work in progress. Regular puja takes place but since it is hardly visited, the temple doors remain closed most of the time. You can call the priest with the help of the nearby locals. He is a gentleman happy to guide you throughout the temple. It is built at the ground level, not on a platform or Jagati like other Hoysala temples. Image of Brahma adorns the toran of the Garbhagriha. It is said that since we cannot worship Brahma directly, he is worshipped through Shiva. When we worship Shiva, Brahma is worshipped indirectly in this temple, hence the name Brahmeshwar. The outer wall of the temple is adorned with figurines of deities, stories from Puranas and epics. Most notable among them is the Varaha avatar of Vishnu and Vigneshwar. 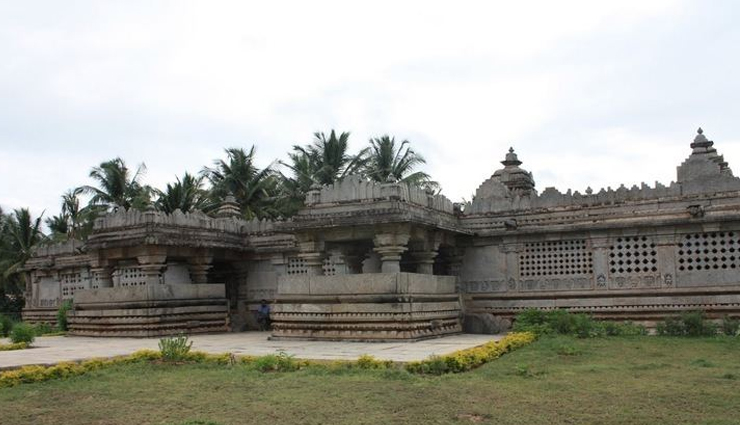 Panchlingeshwar is a Panchkuta temple with five Vimanas on the north-south axis, facing east that opens into a large common pillared hall. Each shrine has a Garbhagriha, Sukanasi in the same orientation that opens into the pillared hall. A well-sculpted Nandi is seated on the porch facing the shrines. Note small shrines of Ganesh and Chamundeshwari on the left and right sides of each of the five shrines respectively.

Notable structures present in the hall are of Subramanya, Adishesha and Sapta Mattrikas, Shiva and Parvati. The five Shivalingas are named as Ishaneshwar, Tatpurusheshwar, Aghoreshwar, Vamdeveshwar, and Sadjyoteshwar. Dwarapalas, Nandi, and Vrungi are outside the Garbhagriha of each shrine. The toran on all the Garbhagriha has an image of Gajalakshmi. The lathe pillars are richly polished, carved, and produce a metallic sound when tapped. The outer wall of the temple has ten avatars of Vishnu and other sculptures of different Gods and Goddesses carved in the Hoysala style.