7 Most Beautiful Waterfalls In The World 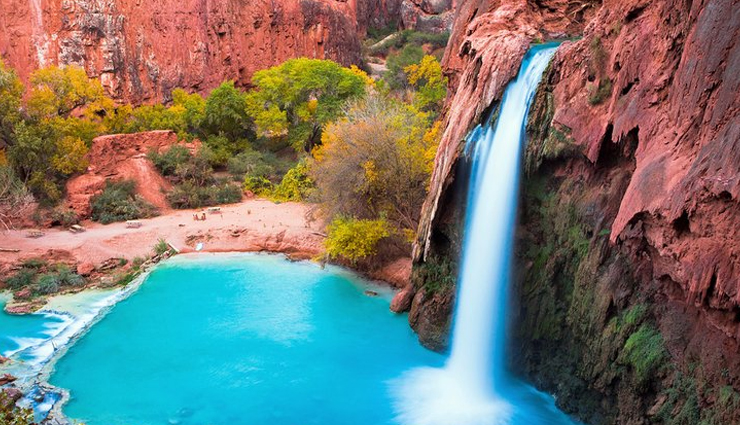 The majestic roaring of waterfalls, with columns of water crashing to earth at great speeds, are often the highlight of any trip. These are among the most breathtaking natural vistas the planet has to offer. The world is full of famous waterfalls that will help you in ‘falling’ love with the planet once again. Look at these simple cascades of water falling through the sky to understand why they are one of Earth’s most captivating natural wonders. While some of these famous waterfalls mentioned below will require quite a trek or a challenging hike, nothing can beat the spectacular feeling of fresh falling mist on the face while you are gazing at the pure majesty of the natural world. From the tallest waterfall in the world to the widest, from single plunge to multi-tiered there are so many types of waterfalls to witness. Check out these mesmerizing, awe-inspiring and most beautiful waterfalls in the world which are set deep in rainforests and thick jungle or set against backdrops of dramatic cliffs and mountains. 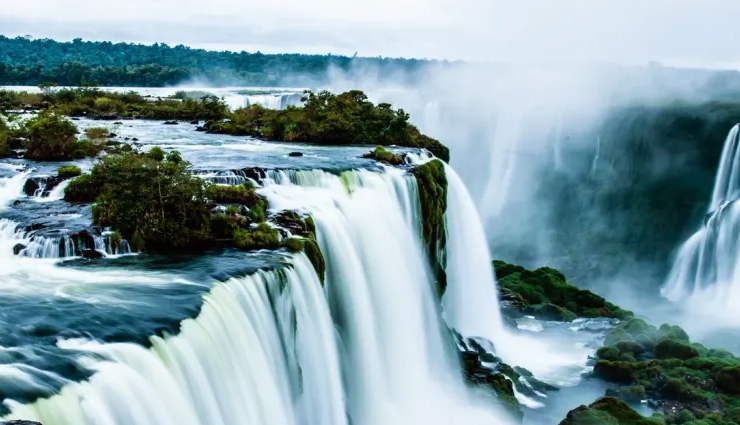 Nearly 300 feet tall and more than 1.5 miles wide, the Iguazu Falls are located between Argentina and Brazil. The Iguazu River which forms the falls creates part of the boundary between the two countries. There are over 270 waterfalls in total, the tallest of which is called ‘Devil’s Throat’. Together, they form the largest waterfall system in the world. This dramatic system of waterfalls is among the most beautiful waterfalls in the world to witness. They were used in Marvel’s ‘Black Panther’ as Warrior Falls in the fictional African country of Wakanda. 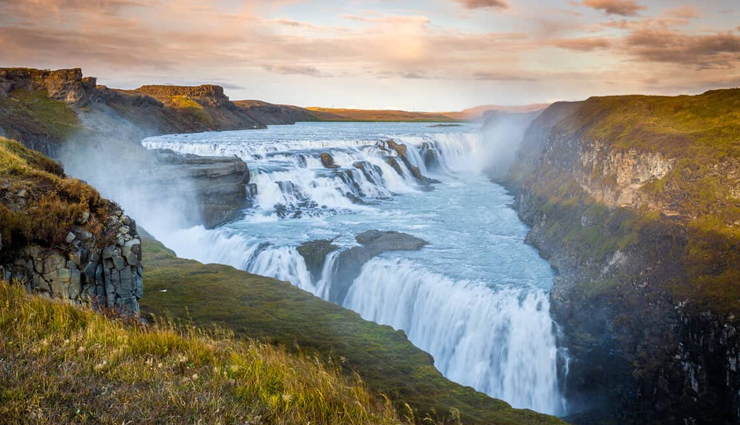 The waterfalls, fed by the Hvítá river, cascade over 150 feet into a gaping gorge, and in the summer, the sun shines through the billowing spray, giving it a golden hue. This gives rise to the name Gullfoss (or golden falls). It is also one of the most iconic sights in Iceland and is part of the “Golden Circle” of tourist sites, which also includes the Þingvellir National Park, and the geothermal area in Haukadalur. 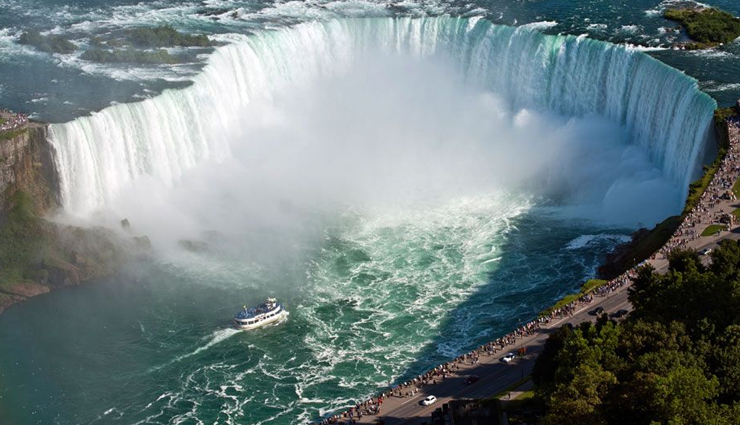 Situated on the border of two countries, Niagra Falls is actually three large waterfalls that straddle the international border between the Canadian province Ontario and the American state of New York. More than 750,000 gallons of water flow through Niagra Falls every second. Each season brings something new to this popular attraction. In the summer there are various boat tours and the Clifton Hill SkyWheel at the Niagara Falls. In the winters, if you’re lucky, you might be able to see the Niagara Falls completely frozen. 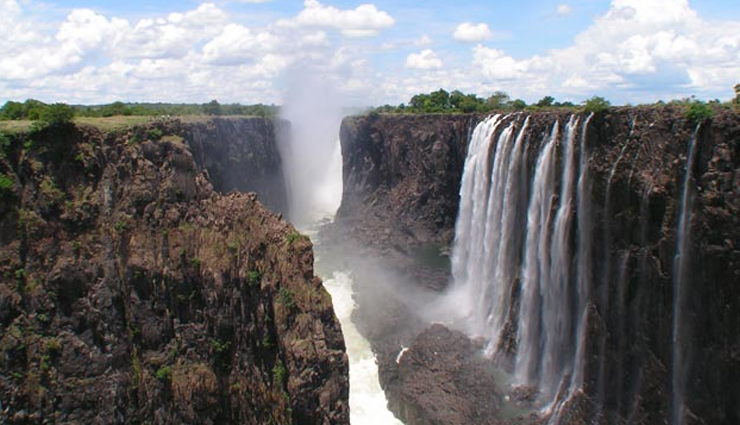 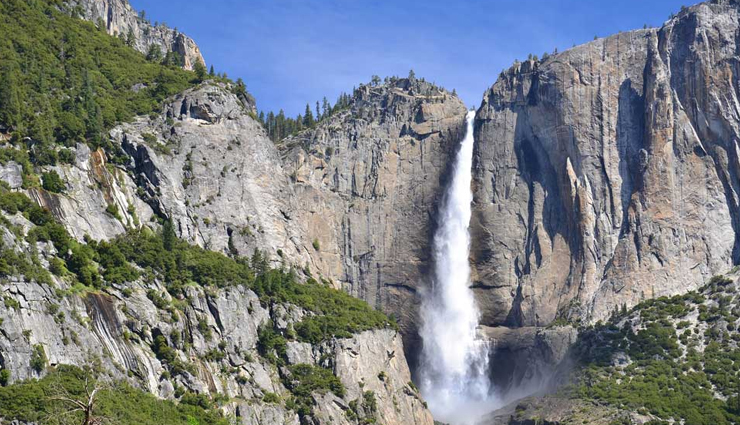 The Yosemite Falls are made up of three separate falls that make a 2,425-foot drop, creating stunning lunar rainbows (called moonbows). Yosemite Falls are located in California’s Yosemite National Park which is home to five of the world’s highest waterfalls, as well as 300 lakes, meadows and sequoia forests. 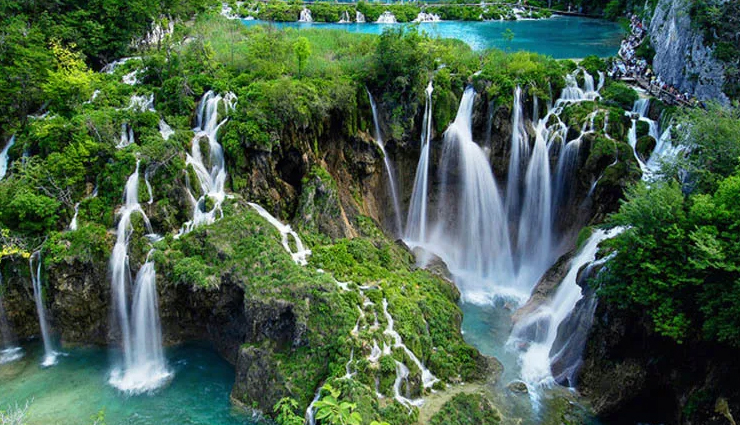 Plitvice Falls are not just one attraction, but a series The Plitvice Lakes National Park is known for its 16 terraced lakes and interconnected waterfalls. These lakes are divided into the Upper Lakes and the Lower Lakes, both with their own stunning sights. For adventure enthusiasts, this waterfall is also the perfect place to go kayaking, canoeing, hiking, and rafting. 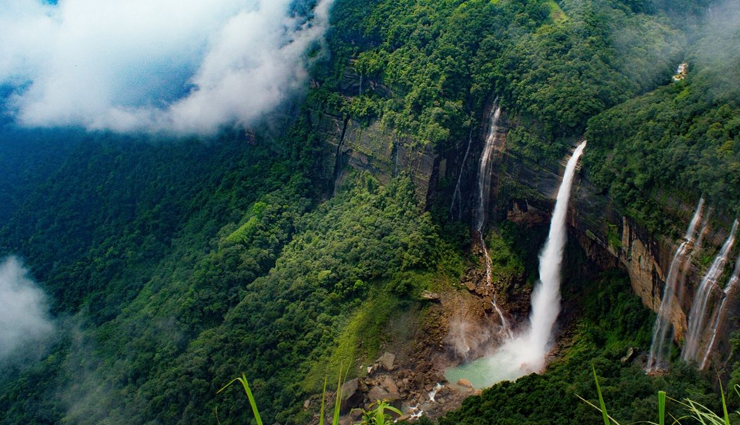 Tucked away in the northeastern Indian state of Meghalaya is the Nohkalikai Falls. Located in the Cherrapunji Hills (said to be one of the wettest places on earth) they are named after a woman called Likai, who jumped off the edge after she learned that her husband killed her daughter, the pond at the bottom of the 1,115-foot waterfall in Meghalaya turns green in the summer. It is the highest waterfall in India (the tallest waterfall in India of the plunge type).