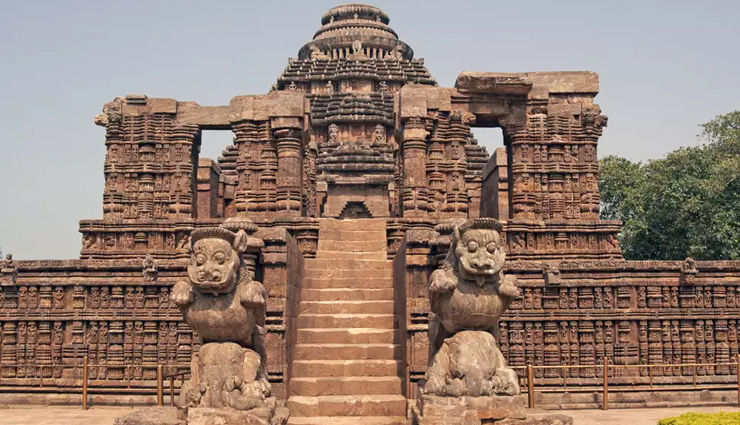 Konark Sun Temple is the most popular sun temple in the world. It is difficult to imagine how grand it would have looked when it was intact and when all the seven horses in running posture would have made it look like a chariot in motion. The closest you can feel the scale of this temple is to see the Puri Jagannath temple, which is of comparable scale. Odisha has 4 different kshetras or regions, identified by the four Ayudhas of Vishnu or the things that he holds in his four hands. Of these Konark is the Padam or the lotus kshetra. In fact, the temple was called PadmaKesara Deul and the presiding sun god was called Mahabhaskara. Konark refers to the corner that worships the Aditya or Sun. The region is also called Arka Kshetra.

As per Pauranic sources, Banks of Chandrabhaga river in Utkala (which is an ancient name of the Odisha) was the place for Sun worship. The legends associate this place with Sambha, the son of Krishna and Jamvanti who worshipped the sun here to get rid of a skin condition. The place is also associated with Multan, which was also a major center for Sun worship. Remember the river Chenab there was also called Chandrabhaga.

There are various theories about the downfall of this temple. They range from being destroyed by invaders like Kala Pahad or to engineering failure that lead to its gradual fall. When it was re-visited in 19th CE by James Fergusson, the main temple was a pile of debris from which no main deity was recovered. The Arun Stambh or the main pillar of this temple was moved to Puri Jagannath temple in 18th CE by the Maratha Rulers. What you see today is the shell of Mahamandapa filled with sand and a Natya mandap in front. The walls are thankfully preserved for us to admire the sculptures outside. 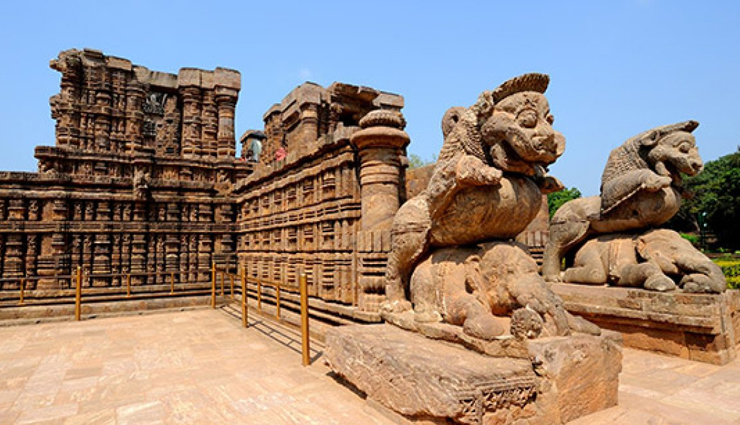 Konark Sun Temple is a great example of Kalinga temple architecture on a scale that is rarely seen. I still wonder how someone imagined a temple as a chariot being pulled by 7 horses, recreating the iconography of the presiding deity at such a massive scale. The tallest part of the temple is missing, and still, the temple looks grand. The chariot has 24 wheels indicating the 24 hours of the day and also 24 fortnights in a year. The 7 horses, representing the 7 days of the week, are duly pulling the chariot. I wish someone had preserved the drone shot of a fully built temple for us. Even when it is designed in the chariot shape, it still follows all the Kalinga duel style architecture style. 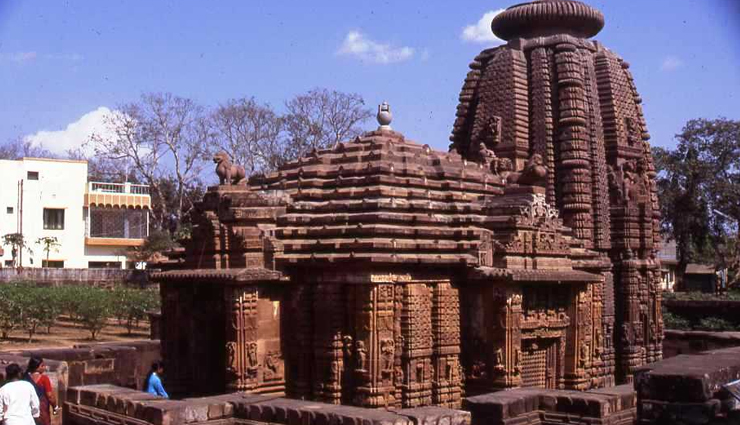 The massive structure that we see with beautifully carved door jambs is Mandapa or Jagmohan as it is called in Odisha. You are not allowed to climb on top due to the fragile nature of the structure. However, you can see the green-colored door jambs with intricate carvings in Chlorite stone. The rest of the structure is in Khondalite and Laterite stone. None of these stones are available locally and were probably brought from a distance over waters of the Chanrabhaga river. Scholars say that the stones were smoothened, fixed and then carved in-situ. That says a lot about the skills to handle the tough stone. Doors are also aligned with the movement of the sun. The front and back doors get the sunrays on equinox days and the two side doors get the first rays during the northern and southern movement of the sun. 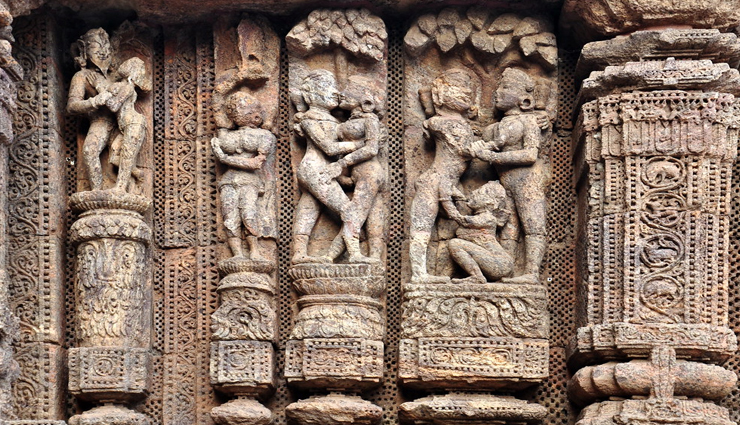 It is said that the temple was built like Titans but finished like Jewelers. You must admire these sculptures sculpted with jeweler’s precision. Like most temples, Sculptures at Konark Sun Temple include deities, scenes from human life, royal life, erotica, flora and fauna, architectural motifs and decorative elements at different scales. 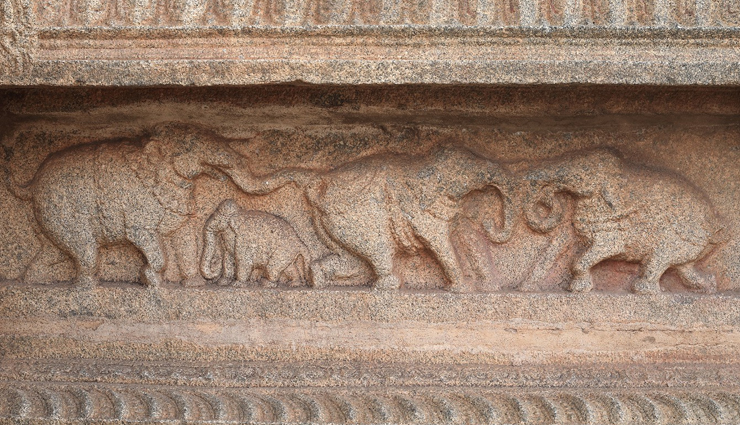 # Elephant panel at the bottom

A panel of carved elephants runs at the bottom of the temple structure giving an impression they are bearing the load of the temple. Notice the baby elephants too engraved on this panel. 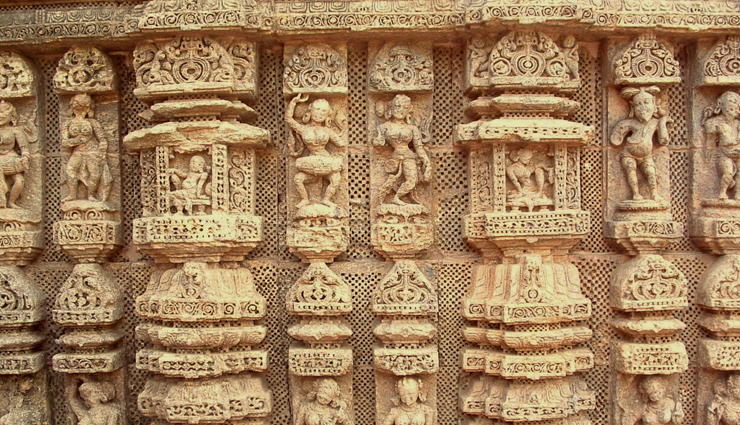 A lot of Naga Nagini sculptures can be seen on the wall panels at the human eye level. Most of them are half-human & half serpent. You would notice them as soon as you start walking around the temple in a clockwise fashion. Around them, you would also see women engaged in martial arts or riding a horse. 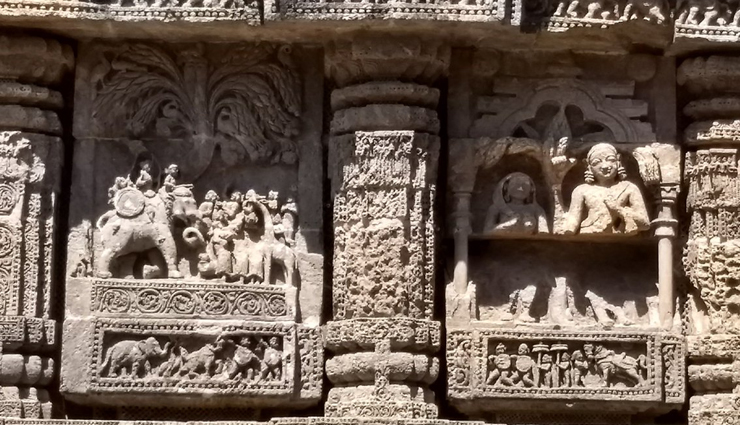 One of the most intriguing sculpture is that of a Giraffe, an animal that is not native of India. It indicates the awareness of the animal if not its real presence in the region. Does it indicate trade links with Africa? Probably yes. Imagine a trader sitting with a sculptor and explaining how this animal looks like with its long neck. Or maybe it was a gift from an African trader. 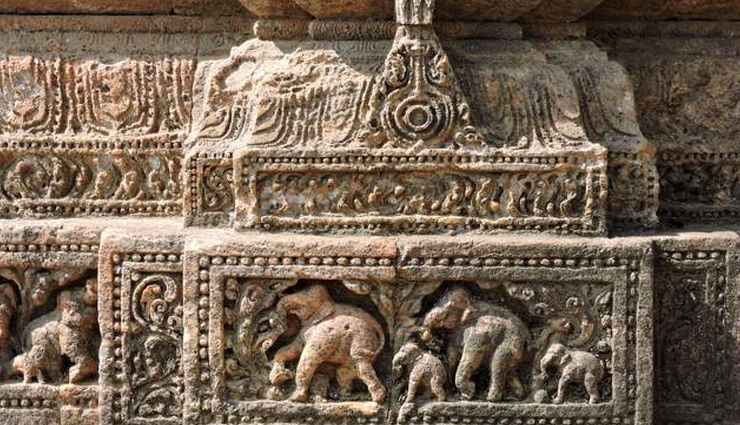 These can be seen as you approach the temple and some on the platform next to it. They are in a rage, crushing the hunt. I wonder if they were depicting some war that they participated in. The giant Lion Crushing the elephant sculpture that you see at the stairs as soon as you enter is the symbol of power. These make scholars ask if the temple was built to commemorate a successful military campaign. Guides interpret it as crushing of a human being who gets too much wealth and power. 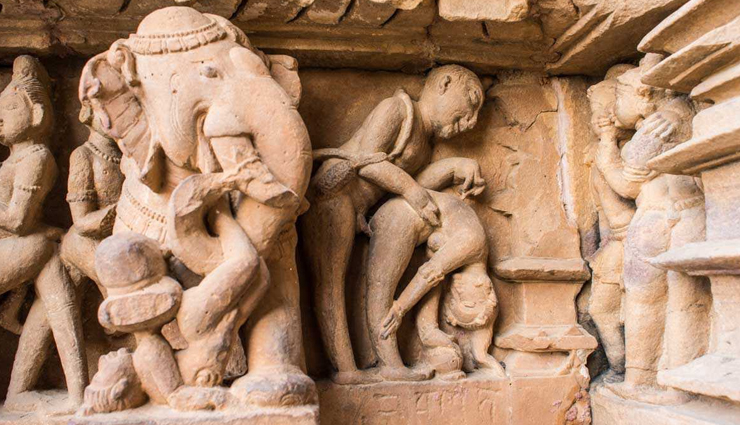