Most Famous Tourist Attractions To Visit In Mahabalipuram 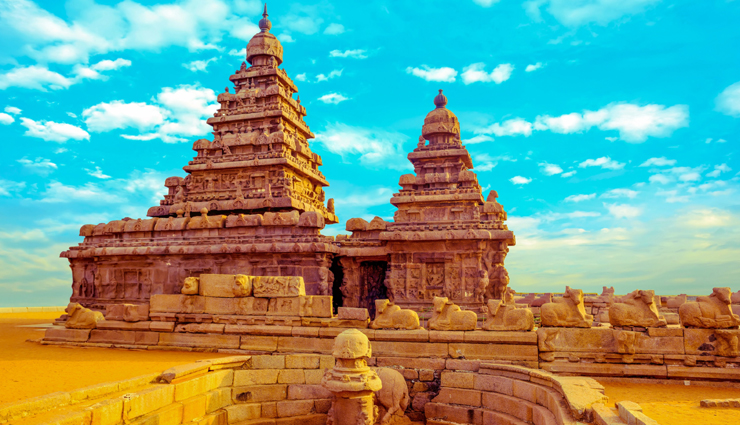 One can reach Mahabalipuram by driving some 60 odd kilometers down the East Coast Road from Chennai. The little town of Mahabalipuram or Mamallapuram is a popular weekend getaway spot for urban dwellers, and also a great stop-over while travelling to nearby Pondicherry from Chennai.

The modern day Mahabalipuram has become a treasure-trove of heritage sites and is an ancient sea-port city from the times of Ptolemy. The legends behind the town’s two different names are fascinating as well; some say the name Mahabalipuram comes from the name of the King Mahabali who ruled the region for a long time, some others say that the ruler of the region Narasimhavarman I who ruled the town was an adept wrestler hence, the name Mamallapuram was given to honor him.

But today, Mahabalipuram is an alluring sea beach experience, as well as provides a good glimpse into history and culture of south India through the skeletons of the monuments that stand to tell the stories of the past. 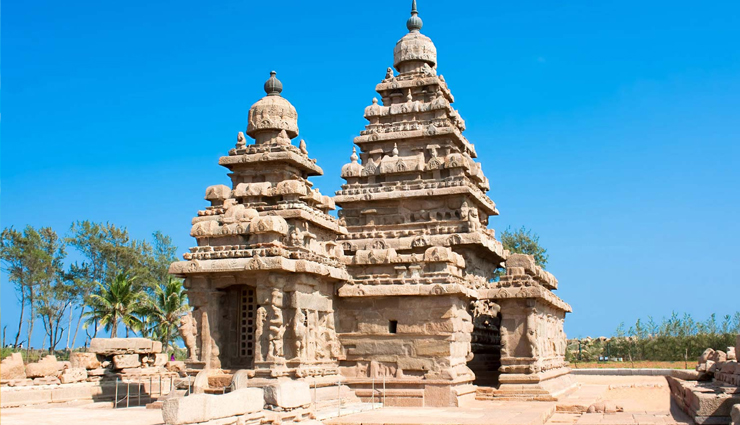 As the name suggests, this temple from the era of the reign of Pallavas lies just at the sea shore of Bay of Bengal. The golden colour of the temple structure contrasts against the clear blue sky above and sea behind it, this temple has been declared as an UNESCO World Heritage Site. It is said that out of seven such temples this is the only one that survives and the rest have been submerged into the ocean. Interestingly, sightings of a few of them happened during the massive tsunami, but as of yet there is no sure way to tell if that is the case as no diving expedition ever took place! 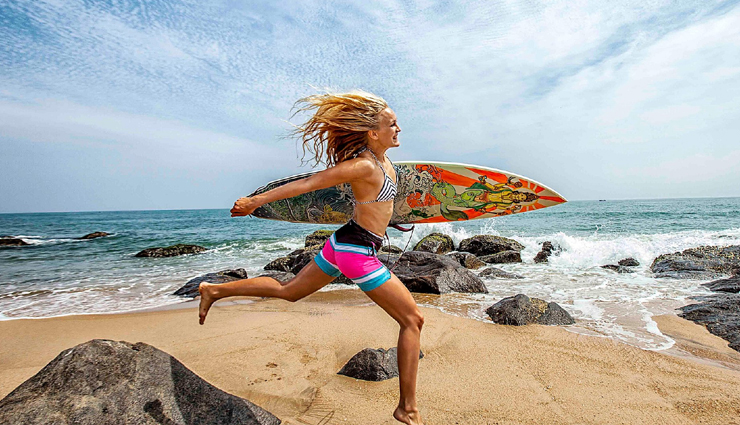 A sunny spread, clear blue waters, golden sands and surrounded by historical monuments all around, the Mahabalipuram beach is the place to be if you like to get lost in counting waves, enjoy the mild push of sea shore wind and like to watch ships disappear into the horizon. 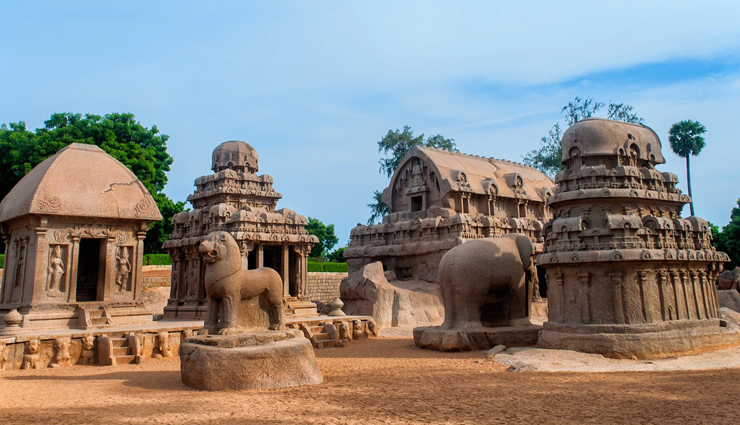 Also called as Panch rathas is yet another popular set of monuments in Mahabalipuram, and is the perfect example of Dravidian architecture. Built in identical shapes of pagodas, they almost resemble Buddhist shrines. However, it is said that these rathas have to do with the great epic Mahabharata. These five rathas are named after the characters of Mahabharata, namely Draupadi, Arjuna, Bhima, Nakul and Sahadev and Yudishtira’s ratha and are each dedicated to a Hindu deity like Durga, Shiva, and Indra. This site is also a UNESCO World Heritage site and never fails to impress people with the intricate carvings on the walls of these structures. 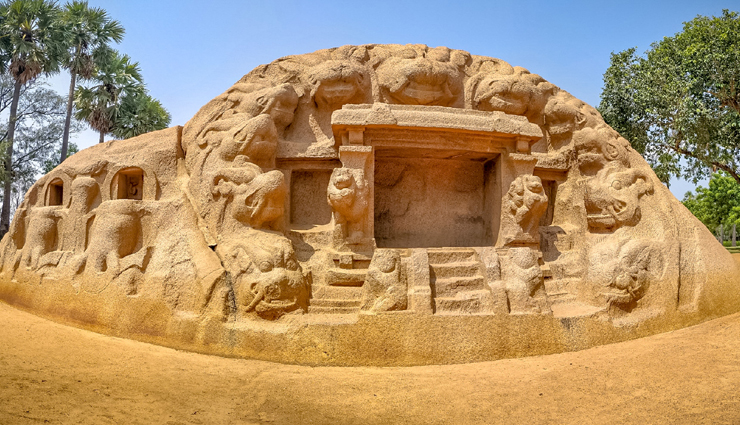 Located 5 km to the North of Mahabalipuram, this temple is located in the town of Salurankuppam. This temple houses a shrine that is dedicated to the Goddess Durga. The figures in front of the cave are massive and carved intricately; the sites are perfect for day-trips and picnics and are visited by hundreds of tourists. The intricate carvings of tigers covering the cavern of the temple make it a must-see destination. 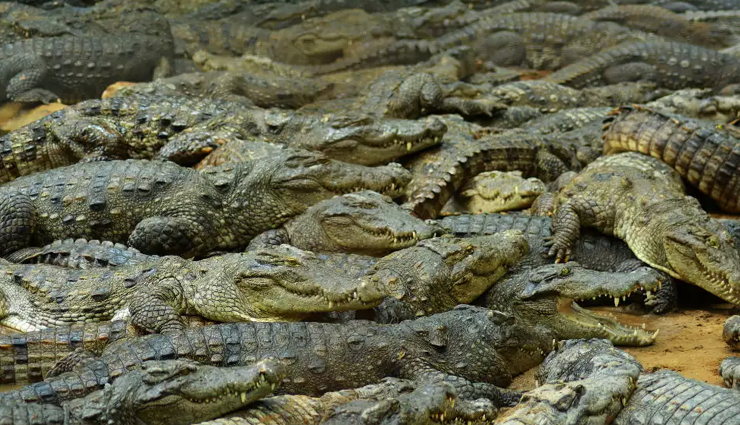 Located 14 km from Mahabalipuram, herpetologist Robert Whittaker established this crocodile shelter in the year 1976. There are numerous species of crocodiles of Indian and African breeds kept in this bank that mimics their natural habitat. There is also a snake farm located within this site and the anti-venom is produced in the labs here. The process of extracting snake venom is a popular tourist attraction here and allows the Iluras (local snake charmer tribe) to make a living. 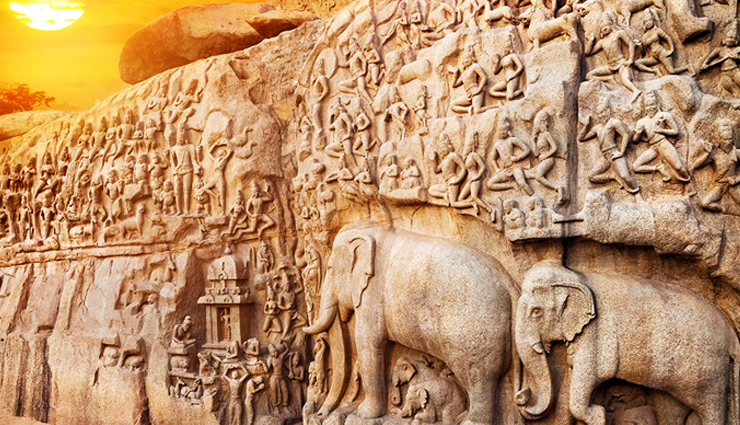 The largest Bas relief site present open air, which is also called as the Descent of Ganga. This amazing Bas relief stretches for a 100 feet and is only 1 km from the city centre. The intricate carvings on this relief depict the story of Arjuna serving penance in order to please Lord Shiva. While some others says this is the story of Lord Bhagiratha bringing down Ganga on the Earth. This is a cultural village located on the outskirts of Mahabalipuram. It showcases the cultural side of south Indian history and one can see various homes, indulge in crafts and folklore and soak up the simple traditions of south Indian charm. This is a great experience for people to look back on the happiness behind simplicity and relive a bit of traditional history.