Want To Get Rid Of Laser Tattoo? Here Are Few Easy Ways 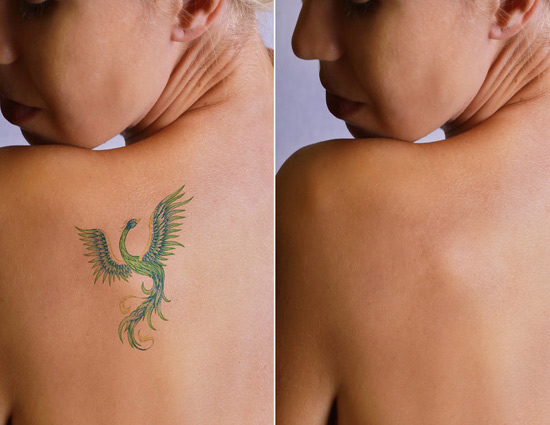 In various surveys conducted world wide, people give different reasons to remove tattoo..i.e.They were too young at that time.Just don't want it as its marked for life.A name is written in a friendship which is no more.My parents got it on me.Unwanted for some jobs.

Tattoo removal is done by lasers that can break down the ink particles in the tattoo. The broken-down ink is then absorbed by the body,A tattoo laser emits a burst of energy within the given absorption spectrum of the pigment to provide a breakage of tattoo pigment. Some tattoos are black and blue but other coloured tattoo such as yellows, greens and fluorescent inks are more challenging to treat than darker blacks and blues, because they have absorption spectra that fall outside the emission spectra available in the tattoo removal laser.

Few coloured inks contain high concentrations of titanium dioxide which is highly reflective. Consequently, such inks are difficult to remove.

A new technique using two to four passes with the laser, twenty minutes apart, caused more breaking up of the ink than the conventional method.

5 Basic Gardening Tools Every Home Gardener Must Have...

8 Home Remedies To Keep Flies Away From House...

Effective Home Remedies To Get Rid of Ants From Home...

Natural Methods To Get Rid of...

5 Indoor Plants That are Best...