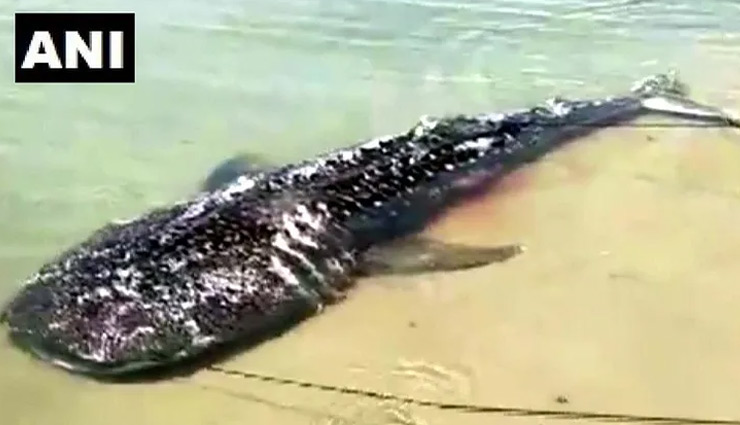 The Maharashtra Fisheries Department on Wednesday initiated a probe and took two men into custody after a carcass of giant whale shark was found on Sassoon Dock in Colaba, reported at Indian Express.

The giant dotted whale shark got entangled in the fishing nets and desperately struggled to set itself free, but failed, said one of the fishermen on board the vessel. Owing to darkness and inclement weather conditions, the fishing trawler decided to sail back to Mumbai, dragging the creature in the nets behind it, and reached here early on Wednesday.

They left the fish along with the net near the 145-year-old Sassoon Docks in Colaba and sailed back into the sea, said Damodar Tandel, President of Akhil Bharatiya Machhimar Kriti Samiti. Later, a crane was deployed to hoist up the massive fish that was around 8 metres (over 26 feet) long, and weighed more than two tonnes.

The crane laid it on the docks as curious fisherfolk gathered around the carcass to click selfies. "We were on a routine patrol in the area and saw this enormous fish, which the local fishermen revere as 'Dev-Masa' lying here," Colaba Police Station constable Swapnil Kumbhar told IANS.

Meanwhile, the Fisheries Department sent a team to probe the circumstances under which the whale shark reached the Mumbai shore as the creature figures in the global list of endangered species of the International Union for Conservation of Nature and the India's Wildlife Protection Act, 1972.

Though Kumbhar was not clear of the next course of action, prominent fisherfolk leader Tandel said the carcass of the whale shark was reportedly acquired by a trader who will extract oil from it and dispose off the remains.

This is said to be the first instance in recent times that such a massive fish got entangled in a fishing net, though the Mumbai and Maharashtra coastlines have witnessed incidents of similar sea-giants getting washed ashore in the past, he said.