This Christmas Tree Is 80 Years Old 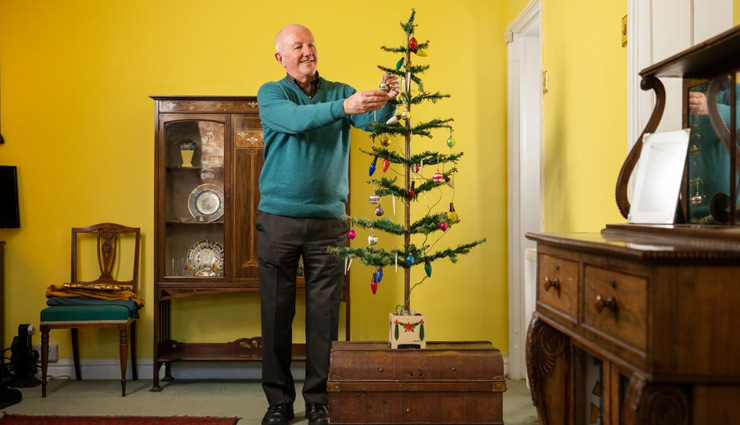 My Christmas tree has stood in my mother’s childhood home, my childhood home and my adult home. It has been around my entire life. I’m 74, which makes the tree at least 80 years old. Mother was brought up near Aberystwyth, but met my father in south Wales. When they married and settled in a small mining village, she brought the tree with her. It cost about sixpence from Woolworths. It is one of the earliest mass-produced artificial trees – they started making them in the 1920s.

In our small community, having an artificial tree was aspirational. Times were tough. Some people bought small real trees, or just a branch. Some had nothing. My first memory of it – and the whole excitement of Christmas – is from when I was six. It started with us putting the tree up a few days before. My parents would unwrap it quite reverentially, decide where to put it and then unfold it. It felt like seeing an old friend every year. It is quite tall, and that was quite rare at the time. The branches have three prongs and fold up into the main stem, like an umbrella. The needles are actually goose feathers and there are some little red berries on it, too. We would decorate it with tinsel and baubles – I remember buying lights in the 1950s, and we had some glow-in-the-dark icicles, too.

The tree is sparse by today’s standards. At the time, people were satisfied with very little, materially speaking. I did have a stocking every year, with nuts, loose change, sweet ciggies and a couple of small presents, all in one of my father’s motorcycling socks. We’d put other presents round the tree. We didn’t eat turkey, though – we had a cockerel from our neighbour, Mrs Lawrence. We loved Christmas and were sociable. The tree was a bit of a local celebrity. We lived in a cul-de-sac and children would come in specially to see it. After we got lights, you could see it shining from the window in the darkness. Before that, we put candles on it, but they were never lit – Mother said it was far too dangerous.

My father was a miner for 49 years. He started work at 13 because he had to pay his mother’s rent. He had a tough life and didn’t want me – his only child – to follow him down the mines. I went to the grammar school and did teacher training. They gave me the tree in the early 1970s. By that time, I’d left home and they were coming to me for Christmas, so it made sense. I immersed myself in the rituals of decorating it. Every family has its own traditions and my parents loved to be involved, but also let me get on with it. I bought some new lights and baubles, and put the old ones away carefully.

Christmas continued to be a family affair at my house with my parents and cousins – everyone was very keen to see the tree and its changing fashion over the years. Tinsel and decorations became classier and brighter, filling it and making it much bushier. My father died first, and Mother loved seeing the tree in her later years, remembering all the happy times when he was alive. Since 1995, when she died, Christmas has been about friends, and everyone who’s seen my tree has loved it. They all want to know its history, the stories around it, and what life was like in a mining village in the industry’s heyday.

I joked about getting a new one for years, and about 10 years ago, I did. I thought the old tree was looking dated and scruffy, but I couldn’t throw it away; it was such a big part of my life. I stopped using it about six years ago.

Even now, my real tree is the old one. It’s a bit of history. But with my parents gone, and no family to pass it on to, it’s time to let it go. I want someone else to have something that has been loved and used. Also, I’m a practical person – I do need to declutter. These trees seem to be quite sought after. Last year, one was sold for over £400 at Hansons auctioneers, and it was quite small. I’m quite glad I didn’t chuck it in a skip.

So I decided to auction mine, along with some of the original decorations. I hope it’ll make another family as happy as it’s made me over the years. As for me, I’ll be in London, looking after a friend’s cats while they are away. There will be a tree, of course; but I doubt it’ll be as old as mine.